October 20, 2022 -- Hydrogels have enabled Princeton University researchers to see how bacteria grow in 3D environments, such as tissues, enabling them to make unprecedented observations of bacterial colonies in their natural 3D state with the potential to develop more effective antimicrobials and other biomedical research applications. Their study was published October 18 in Proceedings of the National Academy of Sciences.

"Ever since bacteria were discovered over 300 years ago, most lab research has studied them in test tubes or on petri dishes," Sujit Datta, PhD, an assistant professor of chemical and biological engineering at Princeton and senior author of the paper, said in a statement.

The traditional approach supports the visualization of how bacteria grow in 2D environments but means little is known about the structures the colonies form in opaque 3D environments such as the human body. However, the Princeton team's work is built on transparent 3D granular hydrogel matrices.

By using tiny balls of hydrogel, the researchers mimicked the structure of soil or tissue while enabling the visualization of the bacteria. The balls are small enough to be deformed by bacteria and allow the passage of the oxygen and nutrients the microbes need to grow.

"It's like a ball pit where each ball is an individual hydrogel. As the bacterial colonies grow in the hydrogel matrix, they can easily rearrange the balls around them, so they are not trapped. It's like plunging your arm into the ball pit. If you drag it through, the balls rearrange themselves around your arm," Datta said.

The transparent hydrogel revealed that the growth of bacterial colonies is uneven. After exceeding a certain size, the colonies adopt a "characteristic broccolilike morphology." The researchers saw the same structure in tests of four different species of bacteria and when they changed the nutrient conditions and hydrogel properties, leading them to conclude that it appears to be a "generic phenomenon."

Datta attributed the structure to two factors. First, nutrient density varies in even the most uniform of environments and the bacteria with access to high levels of nutrients or oxygen will grow faster, causing the expansion of parts of the colony to surge ahead. Second, the researchers found bacteria in the center of the colony seemed to enter a dormant state. Without pressure from the center to expand evenly, the edge of the colony forms bumps and nodules based on variations in the rate of growth.

The researchers hope their findings will help better understand bacterial growth, while benefitting pharmaceutical and medical research, as well as processes that leverage bacteria for industrial use.

"At a fundamental level, we're excited that this work reveals surprising connections between the development of form and function in biological systems and studies of inanimate growth processes in materials science and statistical physics. But also, we think that this new view of when and where cells are growing in 3D will be of interest to anyone interested in bacterial growth, such as in environmental, industrial, and biomedical applications," Datta said. 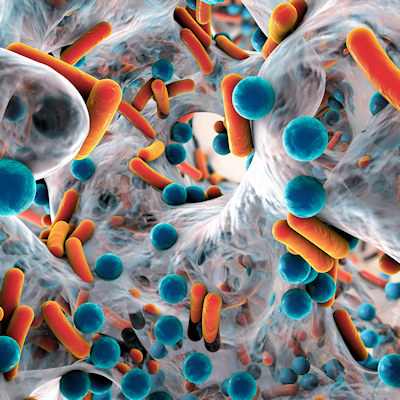 Discovery of toxin that kills bacteria could pave way for new antibiotics
McMaster University researchers have discovered a previously unknown bacteria-killing toxin that has the potential to be exploited for future antibiotic...
Copyright © 2022 scienceboard.net