July 30, 2020 -- Another nonstructural protein, papain-like protease, has been identified as a SARS-CoV-2 therapeutic target with the potential to block viral replication, according to an article published in Nature on July 29.

During infection viruses must overcome host immune defenses, including innate immune responses where cytokines can modulate other parts of the immune system and upregulate antigen presentation. These innate immune systems include type I interferons (IFNs) and nuclear factor kappa-light-chain-enhancer of activated B cells (NF-κB) pathways.

Coronaviruses can suppress innate immune responses and promote their own replication. SARS-CoV-2 relies on the activity of viral proteases -- specifically the main protease and papain-like protease -- to generate a functional replicase complex and enable viral spread.

Papain-like proteases have been studied in SARS-CoV, and now a group of German and Dutch researchers has been able to explore the effect of SARS-CoV-2 papain-like protease on immune responses in cell culture experiments.

Next, the team analyzed the cellular interactome of SARS-CoV-2 papain-like protease. The enzyme decreases Isgylation of cellular proteins leading to decreases in phosphorylation of critical components of the IFN pathways including interferon regulatory factor 3 (IRF3) and Tank-binding kinase 1 (TBK1; activates NF-kB pathways for upregulation of inflammatory signaling). This finding is in agreement with clinical data that suggests that COVID-19 is associated with lower interferon responses than other diseases such as severe acute respiratory syndrome (SARS) or influenza.

Lastly, to support efforts to identify potential therapeutic strategies against COVID-19, the research team tested the effect of a drug that was previously developed for SARS-CoV for potency against SARS-CoV-2.

"We used the compound GRL-0617, a noncovalent inhibitor of papain-like protease, and examined its mode of action very closely in terms of biochemistry, structure, and function," said senior author Ivan Dikic, PhD, director of the Institute of Biochemistry at University Hospital Frankfurt. "We concluded that inhibiting papain-like protease is a very promising double-hit therapeutic strategy against COVID-19. The further development of papain-like protease -inhibiting substance classes for use in clinical trials is now a key challenge for this therapeutic approach."

GRL-0617 is a naphthalene-based inhibitor that does not inhibit other host proteases. The researchers hypothesized that the drug would bind to conserved residue, Tyr268, of SARS-CoV-2 papain-like protease to block the entry of ISG15 to the catalytic site. They found that GRL-0617 effectively blocked SARS-CoV-2 papain-like protease, which led to increased levels of Isgylated proteins, including IRF3, TBK1, and p65 (a marker of NF-kB pathway activation).

The team infected Caco-2 cells with SARS-CoV-2 and treated them with GRL-0617 to see if the drug could block viral replication as measured by cytopathogenic effect. They found a gradual dose-dependent inhibition of SARS-CoV-2. The treatment reduced active viral replication and consequently decreased the release of viral particles from infected cells into the supernatant.

Do you have a unique perspective on your research related to virology or biochemistry? Contact the editor today to learn more. 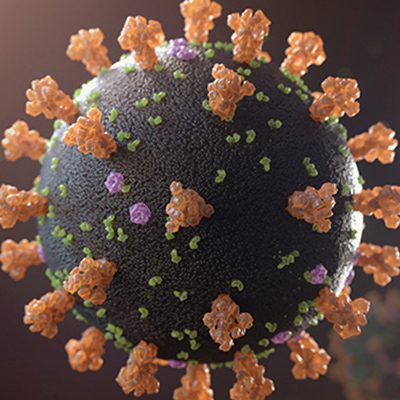 SARS-CoV-2 envelope protein identified as target for antiviral drugs
Comparison of the SARS-CoV-2 genome with other betacoronaviruses can provide useful information on how drugs targeting other coronaviruses may improve...