May 8, 2018 -- Research antibodies are used in basic and clinical research because they recognize and bind to specific antigens, receptors, infectious organisms, and other proteins.

Due to their precise nature, they are essential laboratory tools. Hundreds of companies commercially supply research antibodies to locations worldwide. We at The Science Advisory Board found that many scientists use pre made antibodies, in addition to custom antibodies that they purchase, make in their lab, or share with colleagues for less common applications.

We surveyed more than 1,000 of our members around the globe to share their preferences with regards to usage, brands, product quality, and pricing. Study participants shared that several large players in the research antibody market include Abcam, Cell Signaling Technology, MilliporeSigma, Santa Cruz Biotechnology, and Thermo Fisher Scientific. We must note that Abcam has a vast amount of antibodies in their catalog in order to be a convenient, one stop shopping market. On the other hand, Cell Signaling Technology has honed in on providing quality antibodies for cell signaling research. 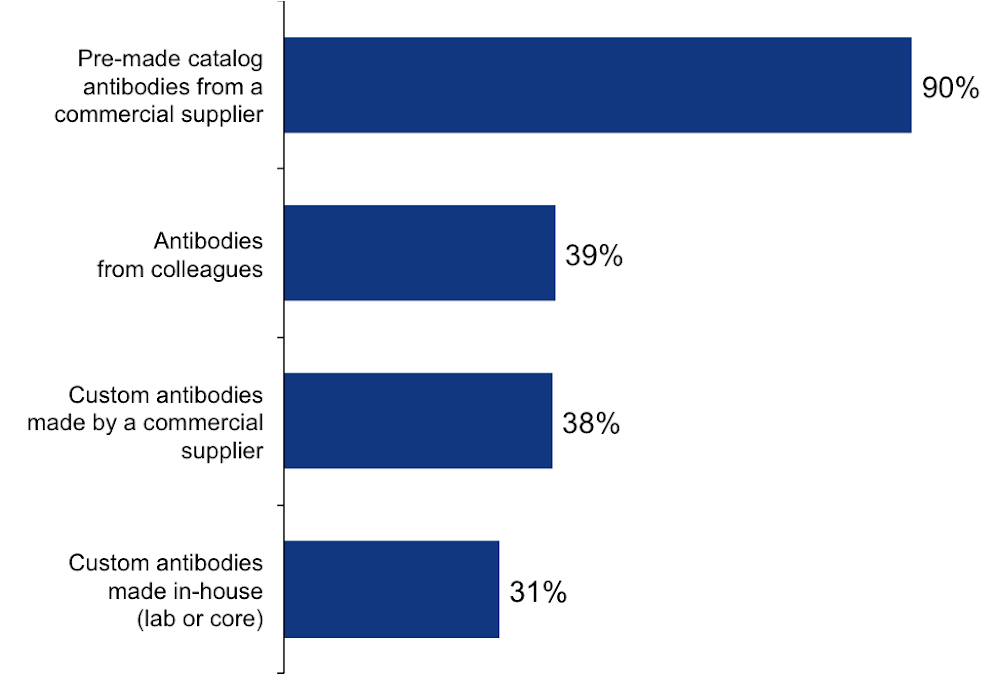 Here at The Science Advisory Board we have found that scientists are likely to repurchase antibodies from a supplier if they have had previous successes personally, or received a recommendation from peers. Our members recognize the importance research antibodies play in bench work and for that reason have several shared sentiments regarding improvements to the current antibody market.

Some commentary from our members:

“A western blot is not enough, the band from the western must be cut out and sequenced by mass spec to confirm protein specificity. We have done a few and are at about 50% of the Ab not detecting what the vendor says!”

“Commercial antibodies should be validated AS STANDARD by the producer for every application they are sold for. Even though they claim to be, I still encounter lack of specificity.”

“Cross-reactivity is one of the key problems we have in my lab. We buy Abs specified as non-reactive with other species but that’s not the case. We work with different cell lines and primary cultures and I think the Ab companies have to up their game!!!!”

“Specificity is critical. Working with GPCR antibodies, the vast majority are ‘crap’. Specificity using protein knockdown with si/shRNAs and/or absence of labeling in knockout animals is critical. I can see that this would be expensive for companies to do, but it is expensive and a waste of time researchers trying different antibodies that do not work against their desired targets.

Reactions like these will steer researchers to try another antibody supplier in the future and perhaps reach out to the scientific community for recommendations.

The Science Advisory Board would love to know… What are your preferences when it comes to research antibodies? What criteria play a role in your purchasing decision? Join the discussion below!