November 15, 2019 -- An international consortium of researchers from the Institute of Cell Biology (ICB) at the University of Bern and Umeå University in Sweden conducted a genome-wide deletion study to determine genes that are required for malaria parasite transmission. The results were presented in Cell on November 14.

Malaria, a deadly infectious disease transmitted by the bite of mosquitoes infected with Plasmodium, affects more than 400,000 people worldwide, despite biomedical advances. Plasmodium contains a relatively small genome consisting of only a single copy of around 5,000 genes. Therefore, gene deletion results in modified parasite phenotype. 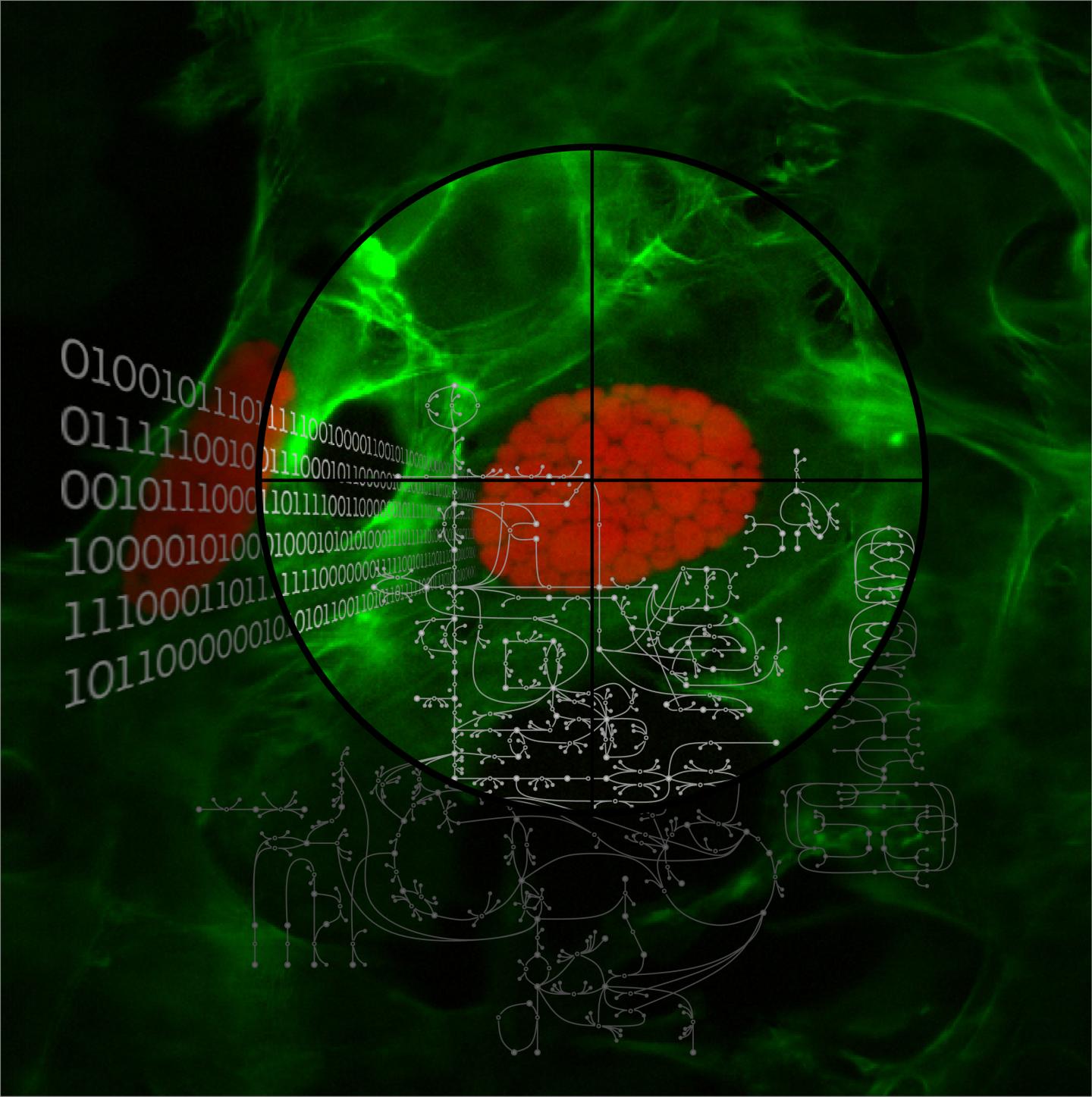 The researchers specifically removed more than 1,300 individual genes in the malaria parasite Plasmodium (in red, host cells in green) and were thus able to identify many new targets in the pathogen. Image courtesy of Institut für Zellbiologie, Universität Bern.

In the current study, the researchers used barcode sequencing to measure relative abundance of 1,342 knockout mutants. This allowed the researchers to determine 461 genes that are required for parasite transmission to mosquitoes through the liver stage and back into the bloodstream of mice. "The deletion screen carried out jointly with the Sanger Institute enabled us to identify hundreds of targets, particularly in the parasite's metabolism," explained first author Rebecca Stanway from the ICB.

The research team developed an iPbe-liver metabolic model for P. berghei that integrates data from the current screen with available genomic, transcriptomic, and metabolomic data to predict with good accuracy the phenotypes associated with a majority of the metabolic subsystems, such as fatty acid and amino sugar biosynthesis. "Thanks to these models, it is now possible to predict which of the previously unexplored genes are vital for the parasite and are therefore suitable targets for malaria control," said Anush Chiappino-Pepe, a collaborator from the Swiss Federal Institute of Technology (EPFL) in Lausanne, Switzerland.

Upon validation of the model results, the researchers found for the first time that not only short-chain fatty acids but also long-chain and unsaturated fatty acids are insufficient to support the rapid Plasmodium growth in the liver stages. Moreover, they hypothesize that the parasite has a differential ability to take up from the host sufficient quantities of specific amino sugars, with the uptake of N-acetyl-glucosamine, which is a limiting factor in the liver stage of infection.

"This would, to our knowledge, be the first indication of an intracellular pathogen taking up amino sugars from its host cell," the team wrote.

"Our results will support many malaria researchers worldwide. They can now concentrate on essential parasite genes and thus develop efficient drugs and vaccines against various stages of the parasite's life," added Ellen Bushell, PhD, former scientist at the Wellcome Sanger Institute.

More than 20 international scientists from the fields of molecular biology, parasitology, statistics, and mathematical modeling participated in this project. "This illustrates the effort in conducting this study, analyzing the data, and modeling the experimental findings to bring them in a meaningful context," said Volker Heussler, co-lead author from the ICB.


If you like this content, please share it with a colleague!
Related Reading
Better flu treatments on the way thanks to the discovery of broadly protective antibodies
Research from the National Institutes of Allergy and Infectious Diseases (NIAID) isolated the antibodies from a person sick with the flu five days after...
New synthetic vaccine fights infectious disease with assistance from the data cloud
A new synthetic vaccine developed by researchers at the University of Bristol and the French National Centre for Scientific Research can be stored at...
New populations of lung cells identified which could aid in the treatment of chronic respiratory diseases
New research confirms the existence of two new subpopulations interstitial macrophages (IM), which are crucial to the pulmonary immune system. Published...
Copyright © 2019 scienceboard.net