May 21, 2020 -- A new pipeline has been developed that combines high-dimensional microscopy with big data analysis to gain molecular insights in T-cell biology and vaccine development. The paper was published in Cell Systems on May 20.

Lattice light-sheet microscopy (LLSM) was recently developed to allow for 4D (x, y, z, and time) imaging with high temporal resolution and minimal photobleaching. However, the technique generates large and highly complex data that are underutilized due to the lack of analysis pipelines for general users. Moreover, LLSM is a low-throughput method that regards each cell as a single data point. Limited data points make it exceedingly difficult to analyze the data. 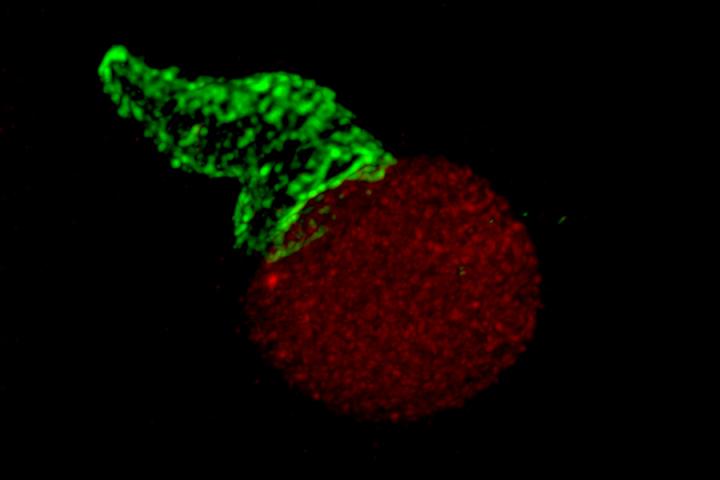 An image of a T cell captured by lattice light-sheet microscopy. Image courtesy of Huang Lab, University of Chicago.

The University of Chicago researchers introduced lattice light-sheet microscopy multidimensional analyses (LaMDA), which is a pipeline that applies big data analysis techniques to high-dimensional LLSM data. Research conducted by students from the Pritzker School of Molecular Engineering at the University of Chicago was initially focused on studying T-cell function using high-dimensional microscopy. They pivoted their research when they identified that there was a need for more effective analytical methods.

"We realized that the images are amazing, but they were being underutilized due to a lack of available analysis techniques," said Guoshuai Cao, graduate student at the University of Chicago, in a statement.

To analyze the high-dimensional data, the researchers had to shift the paradigm of the data collected by LLMS. Rather than focus on the cell as the unit of study, they developed LaMDA to use molecules to generate sufficient numbers for high-dimensional analysis methods.

"We have developed a pipeline to enable machine learning and complex analyses on these videos, which was not previously feasible," explained Jillian Rosenberg, graduate student at the University of Chicago. "These analyses allow us to identify differences between molecules that we cannot identify by eye."

The researchers used LaMDA to image and analyze T-cell receptor (TCR) dynamics on the primary surface to understand T-cell signaling states. Using well-established facts about T cells, they were able to validate LaMDA as an effective analysis pipeline that can be leveraged in other fields.

Next, machine learning was applied to characterize approximately 10,000 individual TCR microclusters on each T cell. The researchers then used big data analysis to investigate which biological feature contributed to the observed differences in TCR microsclusters.

Confirming known biology, the researchers found that antigen stimulation increased the global activation and stabilization of TCR microclusters on the surface of T cells. They also found that LaMDA can be used to discriminate between ligands and detect important dynamic differences between cell states. These insights could offer a physiologically relevant approach to studying other immune molecules and their role in cancer, infection, and autoimmunity.

The researchers applied the LaMDA approach to evaluate whether it can accurately predict physiological in vivo T-cell responses. They found that the LaMDA pipeline can predict in vivo peptide potency in activating T cells, in this case K5 and 102S peptides on MHCs. The ability to predict cellular states could be extended toward the development of peptide vaccines or used to study additional mechanisms of T-cell biology.

"Researchers or pharmaceutical companies could use LaMDA to determine how certain drugs are resulting in subtle changes in subcellular signaling, which provides information on both drug safety and efficacy," Rosenberg said. "Our LaMDA pipeline could also be extended to the development of peptide vaccines."

Lastly, the researchers intentionally developed LaMDA using publicly available packages so that the tool could be easily adapted and used by any biologist or user without expertise in data science techniques. The analysis allows for an interchange of machine-learning algorithms, architectures, or tasks to be substituted to serve various biological applications.

"While we ultimately want to learn more about T-cells, our purpose in creating LaMDA was to provide a tool for other researchers to use for future discoveries," Rosenberg said.

Do you have a unique perspective on your research related to immunology or bioimaging? Contact the editor today to learn more.

If you like this content, please share it with a colleague!
Related Reading
Systems-based analysis helps researchers understand cell migration
An international team of researchers has developed a unique library to study the regulation of the cytoskeleton in space and time. The work, published...
Artificial intelligence helps researchers find new antibiotics
To address antibiotic resistance, researchers have developed a machine-learning approach that can search millions of known chemicals to find new...
T cells work as a team to fight infection
Immune cells may be better at sensing each other than previously thought, according to a new study published in Immunity on February 11. Researchers...
Copyright © 2020 scienceboard.net