Bacteria use 'poisoned arrowheads' to defeat competition, similar to antibiotics

October 1, 2019 -- According to a new study published in Cell Reports on October 1, bacteria use weapons to vanquish their competitors. Researchers at Imperial College London have uncovered a novel weapon that bacteria employ which has a similar mechanism of action as common antibiotics.

This novel approach could be copied by researchers to create new antibiotics. The current study discovered the mechanism of this bacterial weapon and the research team suggests that they could leverage this mechanism to design new antibiotics.

Bacteria utilize protein secretion systems to interact with other organisms and their environment. Effectors of these systems are delivered in a contact-dependent manner and aids in the acquisition of public goods such as metal ions. By deploying this type of system, bacterial cells increase their likelihood of success. 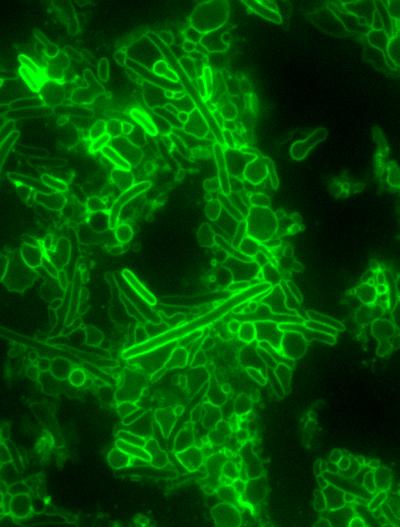 These are bacteria devastated by attack with the toxic arrowhead. T.E. Wood et al. (2019).

The new study looks at Type VI Secretion System (T6SS) which launches toxic packages at rival bacteria. In this system, a conformational change triggers the contraction of a cytoplasmic sheath which expels a spear-like structure to puncture the cell membrane of rival cells. They discovered this 'molecular crossbow' in Pseudomonas aeruginosa delivers effector molecule VgrG2b ('poisoned arrowhead') to fight other bacteria for dominance to control food sources and space, allowing them to thrive in their environments. The team found that the arrowhead, which is a toxin found on the protein tip of VgrG2b contains a metallopeptidase. Once the T6SS system is deployed on rival bacteria, VgrG2b targets the cell envelope which contains the cell wall. Here, it prevents the rival cell from dividing through metallopeptidase action.

"Bacteria evolved alongside each other for billions of years and have designed many strategies to fight and kill each other to prevail in the environment," said lead author Alain Filloux from MRC Centre for Molecular Bacteriology and Infection in the Department of Life Sciences at Imperial. "This new 'toxic arrowhead' is one of the tools developed for this, and finding all the other possible strategies employed for bacterial warfare would help researchers and the pharmaceutical industry replenish the currently dwindling pipeline of antibiotics."

The research validated the presence of the putative zinc-dependent metallopeptidase through crystallization experiments and structure determination using computational tools. Moreover, a series of cellular assays and molecular analyses were used to determine the function of VgrG2b function in the T6SS.

The inhibitory function of this T6SS system attack is very similar to a common class of antibiotics, called beta-lactams. These antibiotics, including penicillin, are the subject of growing concerns of resistance. By elucidating the antibacterial mechanism of this system, researchers will make progress on how the development of therapeutic compounds that target this process.


Do you have a unique perspective on your research related to microbiology? The Science Advisory Board wants to highlight your research. Contact the editor today to learn more.