August 6, 2021 -- By studying how genes affect receptors in the brain under stress, researchers have discovered new molecular mechanisms behind the function of corticosterone, the stress hormone. The research was published in Nature Communications on August 6.

Glucocorticoid hormones (GCs) are important components of the central nervous system that serve a role during normal daily activities and after stressful events. During stressful events, there is a surge of corticosterone, which binds to two receptors in the brain: the mineralocorticoid receptor (MR) and the glucocorticoid receptor (GR). Once bound, these receptors translocate to the cell nucleus and act as ligand-dependent transcription factors.

Genomic-controlled actions in the hippocampus -- the region of the brain responsible for learning and memory -- can control circadian and stress-related physiology and behaviors; however, the molecular underpinnings of the receptor-mediated actions are still largely unknown.

Furthermore, impaired GC secretion and function has been associated with stress-related mental disorders like major depression and post-traumatic stress disorder.

Researchers from the University of Bristol sought to determine which genes regulate MR and/or GR after exposure to stress. To do this, they conducted a comprehensive genomewide study into GC receptor interaction in the hippocampus of rats after acute stress exposure. As controls, the team also measured baseline conditions in the early morning and late afternoon. They integrated the data with genomewide gene transcriptional responses occurring under the same conditions.

Impact of stress and circadian drive on corticosteroids in the brain

Overall, the study produced a comprehensive map of the genomic loci bound by MR and/or GR, the transcription factor binding motifs involved, and the associated gene transcriptional responses, providing novel insights into the function of MR and GR in the hippocampus. 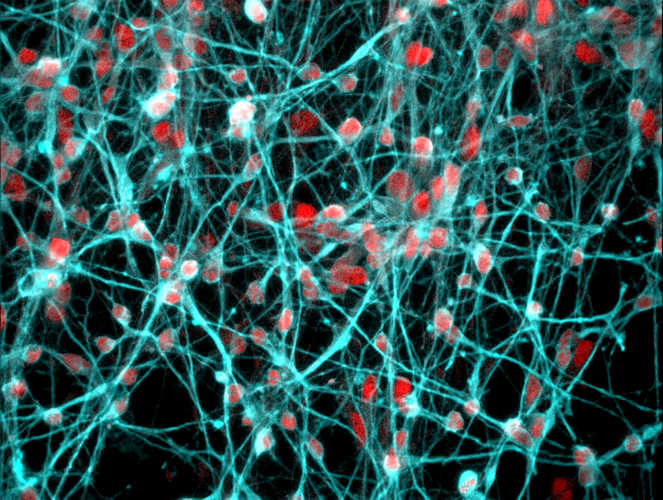 A magnified image of developing young human neurons. The mineralocorticoid receptor, colored red, was found in the cell nucleus of these neurons. Image courtesy of the University of Bristol.

Using chromatin immunoprecipitation sequencing (ChIP-seq) and RNA sequencing, the researchers were able to generate readouts of MR- and GR-bound genes, as well as RNA expression under these biologically relevant conditions. While both receptors were found to bind corticosterone, the data showed that at the genomic level, MR and GR behave differently. They determined that GRs behave predictably -- with rising circulating corticosterone levels due to stress or circadian drive, GR occupancy by ligand increases, which causes increased binding of GRs to corticosteroid hormones. Alternatively, MR responses were much more complex. For instance, MR interactions with certain corticosterone target genes (Fkbp5, Per1, and Sgk1) are low under normal morning conditions but increase in the afternoon or post-stress, while other MR binding sites point to constant interactions with transcription factors.

The scientists also discovered a new link between the MR and cilia function. Cilia are hairlike protrusions from the cell body and are thought to be involved in neuronal development and communication, but their function is still elusive. Removal of these organelles from hippocampus neurons through deletion of certain ciliary genes could result in certain hippocampus-associated disorders.

The team also found that MR signals were associated with genes that encode ciliary proteins and confirmed that MRs are functionally involved in the neuronal differentiation and development of cilia. The experiments showed that MRs constantly bind Cep41 (a cilia gene) in conjunction with regulatory factor X (RFX) transcription factors, which are known to be important for cilia structure and function.

The discovery of the novel role of MR in cilia structure and function in relation to neuronal development has increased knowledge of the role of these cell structures in the brain and could help resolve cilia-related (developmental) disorders in the future, according to the authors.

"This research is a substantial step forward in our efforts to understand how these powerful glucocorticoid hormones act upon the brain and what their function is," said Hans Reul, PhD, a professor of neuroscience at Bristol Medical School: Translational Health Sciences, in a statement. "We hope that our findings will trigger new targeted research into the role these hormones play in the aetiology of severe mental disorders like depression, anxiety, and PTSD."

Do you have a unique perspective on your research related to neuroscience? Contact the editor today to learn more.