July 10, 2019 -- Every year, nearly 3,000 new cases of mesothelioma are diagnosed in the United States. While this is just a small percentage of overall cancer diagnoses, this rare cancer is one that has proven to be extremely difficult to treat. Fortunately, even with this cancer affecting a disproportionate number of patients, researchers are continuing to study mesothelioma in hopes of improving the disease’s prognosis. 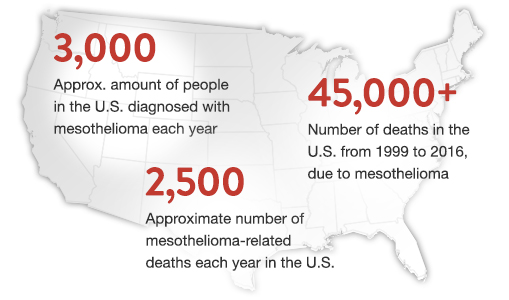 CAR-T cell therapy is an immunotherapy that has been very effective in treating blood cancers, which is why its efficacy is now being tested in treating solid tumor cancers such as malignant pleural mesothelioma (MPM). While research efforts are still at an early stage, the clinical results have shown promise in increasing median survival and tumor regression.

WHAT IS CAR-T CELL THERAPY?

CAR-T cell therapy is a form of immunotherapy that utilizes the body’s own T cells to target and destroy cancer cells. This therapy is a personalized form of treatment, meaning that each patient receives T cells that are geared specifically toward their cancer diagnosis. T-cell therapy works by removing existing T cells from a patient and having them grown and modified in a lab. These new T cells are given a gene for a specialized receptor, known as a chimeric antigen receptor (CAR), which allows the cells to specifically attack cancer cells.

Once these cells are infused into the patient’s body, the patient must be closely monitored to ensure that there are minimal adverse effects. With a large abundance of T cells entering the patient’s body, cytokines will be released, and if too many cytokines are present at once, the patient could experience cytokine release syndrome (CRS). Patients typically have mild reactions, with symptoms such as nausea, headaches, and low blood pressure. However, CRS can lead to fatal complications such as encephalopathy (an injury to the brain).

Despite the potentially dangerous side effects, patients are eager to undergo this form of treatment, as it has proven to be successful. According to the Leukemia & Lymphoma Society, some studies have shown a nearly 90 percent success rate for adult and child participants with acute lymphoblastic leukemia (ALL), a form of blood cancer. With its ability to achieve remission in patients with blood cancer, this therapy is now being utilized to target solid tumor cancers. Solid tumor cancers have been noted by researchers to be difficult to target, with issues arising with drug delivery methods.

Researchers are continuing to conduct trials in hopes of finding a more effective way of treating this aggressive solid tumor cancers such as malignant pleural mesothelioma (MPM). At Memorial Sloan Kettering Cancer Center (MSK), a team led by Dr. Prasad Adusumilli is actively pursuing trials focused on treating MPM with T-cell therapy. In 2018, 12 patients (10 of which suffer from MPM) in the trial held by MSK were given a single dose of IcasM28z T cells intrapleurally.

Initial findings showed that these mesothelin-targeted T cells showed no sign of on-target off-tumor toxicity, and also showed antitumor activity, both promising signals. Furthermore, one of the patients in this trial had a full metabolic response, remaining clinically well 8 months post-infusion. While this is a small sample of patients who were admitted to the trial, these first steps are proving to be effective. The hope is that these results will lead to the administration of larger trials with more patients who are seeking a new route of treatment.

One of the biggest barriers between patients and this treatment, other than being admitted into a trial, is the cost of this treatment. As of now, there are only a couple of manufacturers producing these one-time treatments, and they come with a hefty price tag. Novartis produces the most well known T-cell therapy, Kymriah (tisagenlecleucel). This treatment has been noted to cost anywhere from $370,000 to $450,000 depending on what type of cancer it is being used to treat.

Obviously, the average cancer patient is not going to be able to afford this treatment, making it very exclusive and hard to come by. Even with the help of health insurance, some providers don’t cover clinical trials and other plans award coverage on a case-by-case basis. The only way that CAR-T cell therapy will become widely adoptable as a cancer treatment is if more manufacturers begin to produce their own forms of T-cell therapy.

WHAT IS MALIGNANT PLEURAL MESOTHELIOMA (MPM)?

MPM is a form of cancer that affects the lining of the lungs known as the pleura. The only known cause of mesothelioma is exposure to asbestos, a carcinogenic mineral that was an additive in many materials used to construct homes and buildings from the 1920s to the 1980s. When asbestos fibers become airborne, they are more likely to be inhaled or ingested. These fibers become lodged in the lining of the internal organs, where they can lay dormant for 10 to 50 years, causing inflammation and the development of solid tumors.

Due to the prolonged latency period of this cancer, symptoms often do not develop until later in a patient's life, increasing the likelihood of a late-stage diagnosis. Because of this, a mesothelioma prognosis has historically been extremely poor, with most patients living less than a year post-diagnosis.

Treatment options have also been limited for patients with MPM. The primary first-line of treatment, if pursued, is chemotherapy with a combination of drugs called pemetrexed and cisplatin. While this treatment has shown improvement in median overall survival rate for those who suffer with MPM, it has not been a highly impactful way to treat MPM and ultimately has not led to a case of remission.

Fortunately, with research efforts continuing to make progress, such as those noted previously, we will hopefully begin to see a better survival rate and possibly even remission as a result of CAR-T cell therapy.

THE FUTURE OF TREATMENT

With more trials being conducted and leading to more in-depth data, CAR-T cell therapy is gaining traction and praise in the oncology community. Despite its side effects and high cost, this treatment has become renowned for those who achieve remission despite exhausting all other treatment options. Hopefully, trials will continue to focus on defeating solid tumor malignancies, as these forms of cancer are very difficult to approach without invasive surgery. This treatment is just the beginning of what could be developed in the immunotherapy field, and we are bound to see even more successful treatment options developing in the near future.

The Science Advisory Board would like to thank Colin Ruggiero from the Mesothelioma Cancer Alliance for writing this article.