October 19, 2020 -- A research team has strengthened COVID-19 drug repurposing workflows through independent in vitro validation followed by clinical pharmacology data assessments, with the goal of launching clinical studies of currently approved drugs. The protocol was published in ACS Pharmacology & Translational Science on October 14.

Drug repositioning is a highly active field of biomedical research and is paralleling vaccine research and development in the fight against COVID-19. As such, a number of drugs, including hydroxychloroquine, have already been proposed as new therapies and are undergoing clinical evaluation.

Typically, drugs are searched for anti-SARS-CoV-2 activity by high-throughput screening and in silico strategies. While these strategies have been useful, they are limited and inconsistent across different laboratories.

For example, in an analysis of previous research reports conducted by the researchers, remdesivir (which at the time of this study was not an approved drug) was negative for anti-SARS-CoV-2 activity in two out of five studies evaluated. This may be due to different in vitro studies, cell lines, or initial viral load, but highlights the need for external confirmation.

Moreover, the pandemic has led to a rush to publish early data that resulted in the accumulation of comparatively weak evidence for drug repurposing candidates, including hydroxychloroquine, which was approved and then revoked for emergency use by the U.S. Food and Drug Administration.

Consequently, researchers from the University of New Mexico (UNM) developed and applied a virtual screening strategy to identify currently approved drugs that could be used as treatments for the early phases of COVID-19 disease. 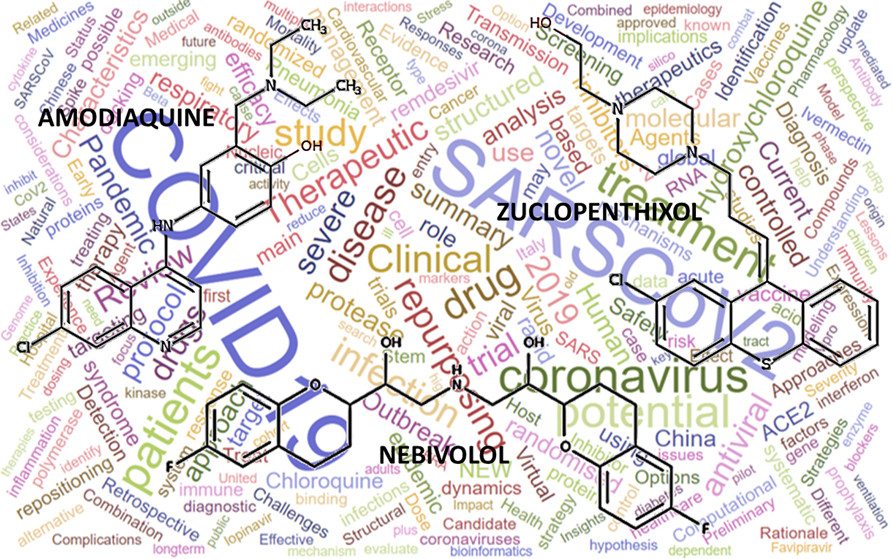 The researchers focused on potential SARS-CoV-2 antiviral candidates with an experimentally validated ligand-based virtual screening (LBVS) protocol. The goal was to find approved drugs that might have similar activity compared to other small molecule drugs that are currently in COVID-19 clinical trials.

The screening protocol was used to query a list of approved drugs, evaluating their structural similarity against hydroxychloroquine, a drug with in vitro anti-SARS-CoV-2 activity. They virtually screened the online drug compendium DrugCentral, which is a database that contains the 2D structures of around 4,600 approved drugs.

Using hydroxychloroquine as a template, the UNM research team estimated the similarity of the way the molecules interact with the surrounding environment using Fingerprints for Ligands and Proteins (FLAP) software. Molecules were ranked based on how similar they were compared to the template molecule. In total, nine drugs were identified with potential anti-SARS-CoV-2 activity.

Next, candidates were forwarded to Steven Bradfute, PhD, assistant professor in the Center for Global Health at the UNM School of Medicine, who tested the compounds against samples of the virus in his biosafety level 3 laboratory. Using Vero E6 cells, the candidates were tested for their ability to block SARS-CoV-2 infection. Results were normalized to chloroquine and infected cells to compare potencies. From this analysis, two drugs (amodiaquine; an antimalaria drug and zuclopenthixol; an antipsychotic drug used in the treatment of schizophrenia) displayed activities similar to chloroquine. Another drug, nebivolol, a beta blocker approved for treatment of high blood pressure, displayed moderate antiviral activity.

Later, the experiments were repeated by University of Tennessee scientists to provide independent confirmation of the findings via inhibitory activity toward the cytopathic effect (CPE) induced by SARS-CoV-2. These researchers also validated the results with titer reduction assays.

While the candidates identified in the study show anti-SARS-CoV-2 activity, they were not designed to target the virus, but rather an original target, which can become an off-target effect leading to unwanted side effects when used to treat COVID-19.

To address this, a lower dose of the drug can be given in combination with other repurposed drugs with antiviral activity. The researchers suggested that the identified drugs could be used as adjuvant anti-SARS-CoV-2 therapy for remdesivir or favipiravir for a synergistic effect.

"Think of it as a whack-a-mole game," said Dr. Tudor Oprea, PhD, professor of medicine and pharmaceutical sciences and chief of the UNM Division of Translational Informatics, in a statement. "Instead of having one hammer, you have two hammers, which is more effective. We're trying to give the scientific community two hammers instead of one."

Many approved drugs that show antiviral activity in a laboratory setting don't have the same effect in living organisms, Oprea explained, so the next step is to launch clinical trials to see whether the medications work in COVID-positive patients.

Do you have a unique perspective on your research related to infectious disease research or chemistry? Contact the editor today to learn more.

New repository may speed COVID-19 drugs to market
As researchers race to find vaccines and treatments for COVID-19, drug repurposing has emerged as potentially the fastest route to get drugs to market....
Copyright © 2020 scienceboard.net