August 7, 2020 -- A new technology platform using self-assembling peptide nanofibers tagged with antibodies can be an effective SARS-CoV-2 vaccine, according to a proof-of-concept study published in Science Advances on August 7.

While intranasal vaccines have been demonstrated to elicit memory T cells and provide rapid protection in targeted tissue, their use has been limited to a live attenuated influenza vaccine in clinical applications. Intranasal subunit vaccines have only been tested in preclinical rodent models, due in part to the need for proinflammatory adjuvants to improve immunogenicity. Adjuvants commonly cause inflammation and are a common vaccine side effect resulting in soreness at the injection site or low-grade fever. 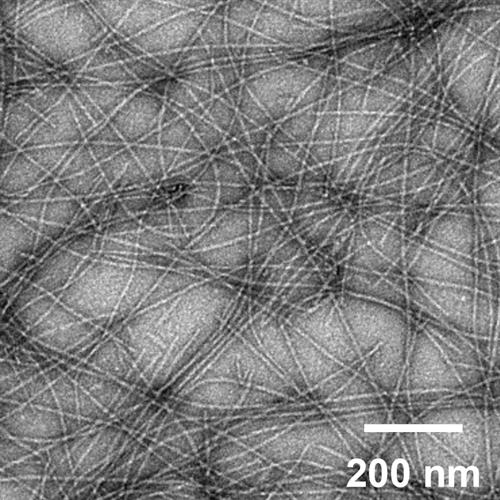 An image of self-assembled peptide nanofibers, which are currently under investigation for engineered vaccines. Image courtesy of the Collier Lab.

Nanoparticle vaccine platforms might be a viable option to overcome adjuvant challenges, as they can act as delivery systems and immunomodulators. For example, previous research conducted by scientists from the University of Chicago and Duke University has shown that the Q11 peptide scaffold system can elicit T cell or B cell epitope-specific immune responses. The system contains short synthetic peptides that self-assemble into fibers with lengths of hundreds of nanometers and widths of around 10 to 20 nanometers.

The immune response produced by this system is achieved without the use of adjuvants. The vaccine uses only specific proteins to act as a main antigen as opposed to live-attenuated or inactivated vaccines which use the whole virus, in a less virulent or inactive form, to cause an immune response. Although subunit vaccines are typically a safer option, they usually require adjuvants to increase their effectiveness, according to the authors.

Furthermore, the system elicits an immune response with minimal local inflammation and the strength of the immune response can be controlled based on design parameters such as density of epitopes or ratio of T- and B-cell epitopes.

Early studies with a nanoparticle platform with a class I-restricted peptide epitope showed that it can elicit specific CD8+ T effector cell responses -- representative of immune responses in the lung. Therefore, it was hypothesized that intranasal Q11 subunit vaccines are taken up by dendritic cells, which process and present antigen to T cells in the lymph nodes, resulting in initiation of an immune response.

"We wanted to understand how the body processed this nanofiber system, from its first interaction with the immune system to the point where it led to a complete immune response," said co-senior author Anita Chong, PhD, a professor of surgery at the University of Chicago Medicine, in a statement. "In order to visualize the uptake of the nanofibers, we decided to try the intranasal route, because it would give us access to dendritic cells in the lungs and let us track their movement into the draining lymph nodes."

Dendritic cells act as a first point of contact for the innate immune system. Lung-resident dendritic cells are located close to the epithelial surface of the respiratory system, where they sample inhaled material entering the lung. These cells present antigens on their own surface to T and B cells, which allows cells to mount an immune response.

In their paper, the researchers showed that the intranasal delivery of a model antigen, pEα, for respiratory pathogens like SARS-CoV-2, attached to a self-assembling nanofibers, results in presentation of the antigen on lung dendritic cells (but not major histocompatibility complex type II or B cells). The antigen induced CD80 responses, which is known to prime T cells to mount antibody responses.

The vaccine triggered antigen presentation in a subset of CD103+lung dendritic cells (associated with CD8+ T cell responses) and CD11b+ lung dendritic cells (associated with CD4+ T-cell responses) followed by their migration to the lymph nodes. The researchers confirmed that the nanoparticles were able to prime the lungs and lymph nodes to elicit T-cell responses. However, further research is needed to determine if the vaccine is able to generate long-term tissue-resident CD4+ T cells, noted the authors.

Most of the T cells produced were TH17 cells that preferentially secreted interleukin (IL)-17A. Given the role that this cytokine plays in providing immunity at mucosal surfaces in the respiratory tract, the authors suggested that the vaccine may be effective in protecting against mucosal infections.

The nanofiber scaffolding provides a physical structure that presents the antigen to dendritic cells, making it easier for the innate immune system to detect the antigen and begin an immune response.

"Before now, we didn't have any real understanding of which pathways were involved in this process, so this study provides some insight into what's going on," said co-senior author Joel Collier, PhD, an associate professor of biomedical engineering at Duke University.

The platform gives scientists and physicians the ability to dial in the immune response to provide the best protection against a pathogen. Another benefit of the platform is that it eliminates the need for cold storage. Without adjuvants, the peptides in the vaccine are quite heat stable and can be delivered as a dry powder to be reconstituted into nanofibers on site.

The researchers suggested that the results demonstrate that this platform has great potential for generating safe, effective intranasal vaccines.

Do you have a unique perspective on your research related to vaccine development or immunology? Contact the editor today to learn more. 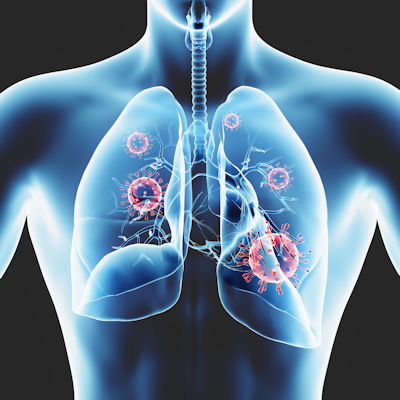 Intravacc forms public-private partnership for intranasal COVID-19 vaccine
Intravacc announced that it is partnering with Wageningen Bioveterinary Research and Utrecht University for the development of an intranasal vaccine against...
Copyright © 2020 scienceboard.net