Precious Metal Analysis with Atomic Spectroscopy- A Touchstone for Today!

November 28, 2018 -- Human culture has valued gold since prehistoric times. Gold was used in trade, and the first gold coins arose in the 6th century BCE. Doubtless, counterfeiting and adulteration arose almost immediately thereafter. Consequently, technology arose to evaluate gold for authenticity and purity. The importance and ubiquity of these methods have led to them entering the language as metaphors – we may speak of an ‘acid test’ or ‘touchstone’ for evaluating or exemplifying something’s worth. Although few of us still use gold in a day-to-day fashion for commerce, the need to assess purity remains, and analytical laboratory tools can be brought to bear on the question.

The gold standard (OK, I’ll stop now) for testing precious metals is still the fire assay. This procedure dates from well before alchemy became chemistry. Indeed, the basics of the technique were known to ancient civilization. For instance, the Romans used it to extract silver content from lead before using the latter for plumbing (recall that the chemical symbol for lead is “Pb” from the Latin plumbum). Of course, there are repercussions to using lead to carry your water supply, whether in ancient Rome or modern-day Flint, Michigan, but that’s a story for another day. 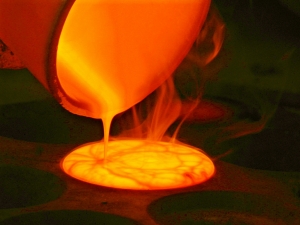 Gold and other noble metals, including the platinum group metals (PGM), are somewhat unreactive and do not oxidize easily. However, gold does readily form alloys with elements like lead and mercury, the latter of which is a hazard to the health and safety of workers in some gold-producing nations, not to mention the environment. These properties’ lack of reactivity and ease of alloy formation enable the modern fire assay, which primarily involves the addition of lead, although other elements and ingredients are also used for particular applications.

In the full assay process, a low concentration sample, such as ore, is first fused with lead oxide in a furnace, reaching temperatures of 1000°C or more. The lead reduces and captures precious metals and sinks to the bottom of the crucible, while the remaining matter forms a slag that can be mechanically separated from it when cool. Then the lead button containing the gold and other precious metals is subjected to the next step in the process: cupellation. The lead button is again heated in a furnace while held in a cupel – a small cup made of bone ash or magnesium oxide. The lead oxidizes and is absorbed by the cupel, leaving behind a smaller bead of the precious metals. Further chemical separation, such as using nitric acid to dissolve the silver content, leaves behind the gold. Comparing weights of the final gold and the initial sample allows one to judge the quality of the ore, bullion, or other sample types.

However, this full process requires several hours to perform. Furthermore, it requires high-temperature furnaces, acids, and other potentially hazardous chemicals. Consequently, other laboratory techniques can and have been substituted for this process, and these are primarily based on atomic spectroscopy, which includes many specific techniques for determining the elemental composition of samples. Some atomic spectroscopy methods are not well suited for gold analysis since they require aqueous samples and this presents difficulties with gold and other noble metals. Indeed, the precise formula for aqua regia, a mixture of nitric and hydrochloric acid that can dissolve gold, was a great discovery of the alchemists (and an excellent freshman chemistry problem in stoichiometry). Consequently, the relevant methods are generally those that can accommodate solid samples.

In the case of jewelry or numismatic specimens, x-ray fluorescence (XRF) spectroscopy provides many advantages, not least of which is that it is non-destructive. For items that have more value than just the gold itself, this is obviously of great importance. Several XRF vendors offer instruments designed specifically for use in precious metals applications, with customers ranging from mining concerns to pawn shops.

Arc/spark optical emission spectroscopy (OES) is another technique that can be applied to the problem. 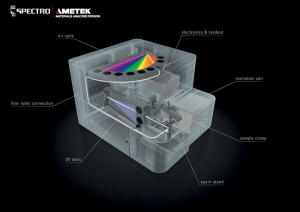 Commonly found throughout the metals industry, arc/spark uses electrical discharges to ionize and sputter atoms from a sample. These energized ions then emit light, allowing the spectrometer to identify the elements from their characteristic excitation wavelengths. Arc/spark can be applied to the lead buttons formed from the fusion process, shaving off considerable time from the overall assay, while still relying on a familiar sample preparation method in the precious metals industry.

Similarly, the lead button or a finished metal sample can be zapped with a laser to release similarly energized ions. Spectroscopy can be performed directly on the ions in a technique known as laser-induced breakdown spectroscopy (LIBS), or the material ablated by the laser can be introduced into an inductively coupled plasma (ICP) spectrometer or ICP mass spectrometer.

Finally, the affinity of gold for mercury can also be turned about. Rather than using mercury to collect gold, one of the most sensitive methods for detecting mercury in environmental samples relies on the use of gold. Mercury analyzers that depend on cold vapor atomic absorption or atomic fluorescence commonly use gold traps to help concentrate the mercury in a sample, thus increasing the sensitivity of the measurements down to part-per-trillion levels or lower.