April 19, 2022 -- Biovectra has started construction of an mRNA vaccine and biomanufacturing center in Charlottetown, Prince Edward Island. With government support, the facility will strengthen Biovectra’s capabilities in the manufacturing of mRNA vaccines and therapeutics when it begins operation in 2023.

The 36,000-sq-ft facility will be capable of manufacturing 160 million doses of the mRNA vaccine, with 70 million doses being packaged and ready for commercial distribution each year.

The building of this facility is part of Biovectra's larger $79.6 million plan to significantly expand production of mRNA vaccines and therapeutics, with a backing of $39.8 million by the Canadian government, as well as $10 million in investments from the province of Prince Edward Island.

Other developments as part of the initiative include the planned completion of a single-use clinical scale microbial suite in Windsor, Nova Scotia, and the opening of a new research and development facility in Halifax, Nova Scotia. Both of these endeavors will further complement Biovectra's specialty in mRNA vaccine and therapeutics production. 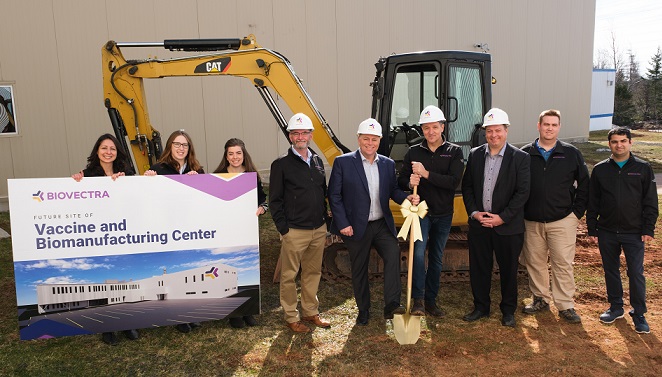 On-site launch of Biovectra's Vaccine and Biomanufacturing Center. Photo courtesy of Business Wire.
If you like this content, please share it with a colleague!
Copyright © 2022 scienceboard.net