January 8, 2020 -- Researchers from Johns Hopkins University report a bioengineered nanoparticle that successfully delivers a "suicide gene" to pediatric brain tumor cells implanted in the brains of mice. Details of the nanoparticle treatment were published in the January 2020 edition of Nanomedicine: Nanotechnology, Biology and Medicine.

Medulloblastoma (MB) and atypical teratoid/rhabdoid tumors (AT/RT) are among the most common solid tumors in children under 3 years old. Treatment options such as chemotherapy and radiotherapy have serious developmental risks in this population, so therapeutic alternatives are urgently needed.

Many gene therapies use modified forms of viruses that work to deliver therapeutic payloads of DNA, but the impact can vary based on whether the patient is an adult or a child.

"A lot of these viruses are safe if you have a mature immune system, but in very young patients with more fragile immune systems, a virus delivery system may pose additional risks," said Dr. Eric Jackson, an associate professor of neurosurgery at the Johns Hopkins University School of Medicine.

To find a different carrier for gene therapy that would be safer for use in children, Jackson collaborated with Jordan Green, PhD, from Johns Hopkins Kimmel Cancer Center Bloomberg Kimmel Institute for Cancer Immunotherapy. Green is also a professor of biomedical engineering and is director of the Johns Hopkins Biomaterials and Drug Delivery Laboratory.

Previous research has shown that a good treatment for glioma in adults could be poly(beta-amino ester) (PBAE) nanoparticles containing plasmid DNA encoding the suicide gene herpes simplex virus I thymidine kinase (HSVtk). These nanoparticles successfully spread through tumors and result in a higher survival rate for patients.

What's more, PBAE nanoparticles can be engineered to contain primary, secondary, and tertiary amines with hydrolytically cleavable ester bonds that allow for effective DNA binding and encapsulation, endocytosis within the host cell, subsequent endosomal escape, and intracellular DNA release for transcription and translation of the exogenous gene of interest.

All of these characteristics make PBAE an ideal biomaterial for the delivery of genetic materials for therapeutic indications.

"It's an exciting alternate way to be able to deliver gene therapy to a tumor in a selective fashion that targets only tumor cells," Jackson said. "Our idea now is to find other collaborators who may have a gene therapy that they think would work well to kill these tumors." 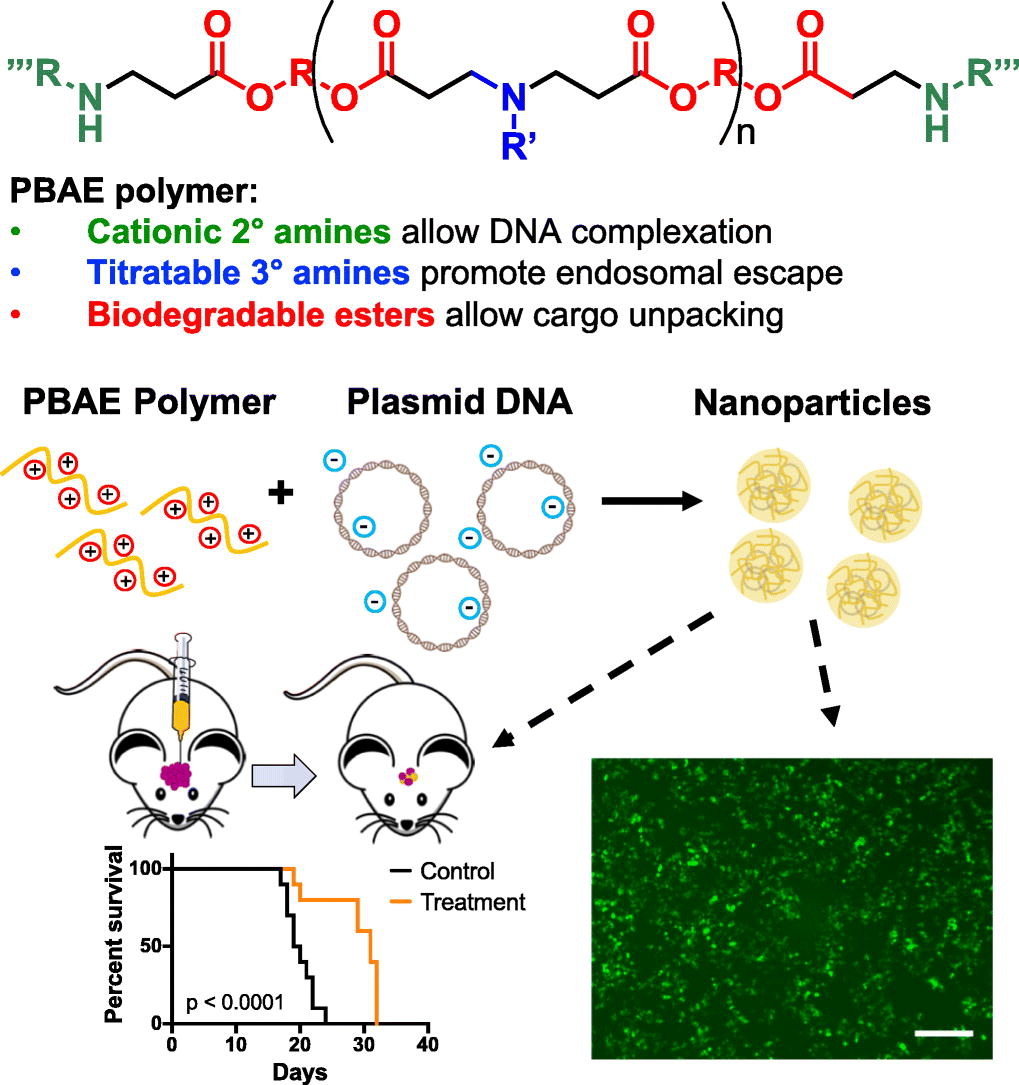 In the current study, researchers developed a small library of PBAEs and examined their ability to deliver HSVtk to pediatric brain tumors. In vitro assays showed that treatment with HSVtk nanoparticles and the prodrug ganciclovir resulted in greater than 65% cell death in tumors. The success of this system may be due to a well-documented bystander effect, whereby cell death is promoted by releasing activated prodrug into the cell medium or through gap junction intercellular communication.

"By making small chemical changes to the polymers that make up the nanoparticles, we can significantly change the cellular uptake into particular kinds of cancer cells, and the subsequent gene delivery to the cytosol, in a cell-specific way," Green said.

In vivo experiments demonstrated the efficacy of using PBAE nanoparticles to carry and deliver HSVtk to medulloblastoma and atypical teratoid/rhabdoid tumors. The survival rate in mice with AT/RT was increased by 20%, with mice treated with HSVtk surviving to 42 days compared with 35 days for untreated mice. The survival rate in mice with MB was increased by 63%, with treated mice surviving 31 days compared with 19 days in untreated mice.

The researchers hope that PBAE nanoparticles can be used to deliver a variety of gene-based treatments -- including therapies that alter the expression levels of genes, turn genes on and off altogether, or sensitize cells to other therapies -- depending on the specifics of a patient's tumor. The nanoparticles "can carry larger genes than what can be carried by a virus, and can carry combinations of genes," Green said.

"It's a platform that doesn't have limitations on the cargo size being delivered, or limitations related to immunogenicity or toxicity," he concluded. "And, it is easier to manufacture than a virus."


Do you have a unique perspective on your research related to nanomedicine or bioengineering? Contact the editor today to learn more.

If you like this content, please share it with a colleague!
Related Reading
New chemistry technique builds more precise nanoparticles
New research published in Nature Communications on November 27th demonstrates a new chemical technique that provides researchers enhanced control...
New nanoparticles help reduce inflammatory disease
Researchers from Washington State University have discovered a potential new treatment option for diseases associated with inflammation. The study, published...
Novel "death star" nanoparticle discovered for potential use in targeted therapies
A novel nanoparticle has been reported by researchers at San Diego State University with the potential to serve as a delivery system for therapeutics....
Copyright © 2020 scienceboard.net