March 10, 2022 -- The human immune system can be a powerful weapon in halting the spread of cancer, leading to long-term remission. However, many tumors find ways to protect themselves by switching off the immune response. Scientists have discovered a new way to reactivate T cells to attack solid tumors and boost existing therapies in mice, according to research published in Cancer Discovery on March 8.

The immune system is tightly regulated: too active and it can cause severe damage; too dormant and diseases will take over. While this control is usually balanced in healthy people, cancers can hijack the controls to dampen an immune response and allow the tumor to grow unhindered. In particular, tumors often activate checkpoints that regulate the T cells that are able to destroy cancer cells. 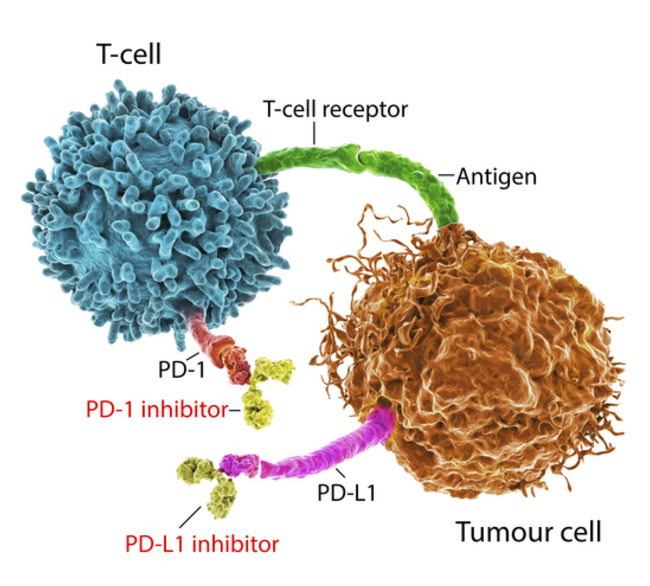 Understanding how tumors activate the programmed cell death 1 (PD-1) checkpoint in T cells has revolutionized treatment for certain cancers. By blocking this process with new drugs, the T cells become active once again and can target the cancer cells. In some people, anti-PD1 treatment can lead to long-term remission; however, it is not effective in all cases and resistance can develop.

While immunotherapies like checkpoint inhibitors have been successful in some blood cancers, they often do not work in solid tumors where the immune cells are unable to penetrate. Extending the applicability of these treatments could significantly improve survival rates for these cancers.

Now, another checkpoint identified by scientists could offer a new way to activate T cells against solid tumors. The team, led by researchers in Australia, found that removing the protein PTP1B in mice with a form of breast cancer slowed the growth of the tumors.

The T cells found in the tumors produced higher amounts of PTP1B, suggesting that the checkpoint is activated by the cancer. Inflammation caused by tumors activates the PD-1 checkpoint, so this could also be the trigger for PTP1B.

A drug candidate designed to target PTP1B was injected into the mice and appeared to increase the antitumor activity of T cells. This compound, called trodusquemine, was previously shown to be safe and well tolerated in early-stage clinical trials.

When this was combined with a PD-1 inhibitor, they were more successful in suppressing cancer growth than with either treatment alone. This suggests that the two treatments work independently, but the precise mechanisms involved need to be established.

The trodusquemine injection in mice also boosted the effect of chimeric antigen receptor (CAR) T cells — a therapy that takes T cells from a patient, modifies them in the lab to better target the cancer, and injects them back into the patient. CAR T cells are much less effective against solid tumors, but inhibiting PTP1B in mice allowed the cells to reach inside a mammary tumor and significantly extend the mice's survival.

"While more pre-clinical work is needed, our findings show that superior outcomes were achieved when we combined PTP1B inhibition with existing immunotherapies in mice," Tony Tiganis, PhD, senior author of the paper and professor at Monash University in Australia, said.

Tiganis and his team are working with a company that is developing PTP1B inhibitors that can be taken orally to test their effects in lab models.

"To advance this work, a key next step will be to further define the impact of PTP1B deletion in CAR T and conventional T cells in humans," said Florian Wiede, PhD, first author of the paper. "There remains an urgent clinical need to identify and validate cellular targets to revive and sustain T cell responses in cancer."

Critical step identified in immune system response could lead to new treatments
New research has identified a crucial protein that controls the immune system's release of a key factor in fighting infections. The study, published in...
Copyright © 2022 scienceboard.net