SARS-CoV-2 disguises its own genetic material to facilitate infection

July 24, 2020 -- The SARS-CoV-2 virus is able to camouflage itself to promote viral replication, as revealed by structural details of proteins on the surface of the virus. Researchers discovered an enzyme that they believe could be an important target for antiviral drug development, according to a July 14 Nature Communications report.

SARS-CoV-2 is able to hijack host translation machinery with enzymes that are encoded by the coronavirus genome to modify the 5' end of virally encoded messenger RNAs (mRNAs) by creating a cap-1 structure.

A 5' cap on RNA stabilizes mRNA and enables translation during protein synthesis. Cap-0 structures, typically referred to as m7G cap, are essential for efficient translation of mRNA. However, the addition of a cap-1 structure, m7GpppNm, has been shown to be an important mechanism to evade cellular innate immune responses. A cap-1 structure is generated by methylation of the cap-0 structure at the ribose 2'-oxygen position of the first nucleotide by a ribose 2'-oxygen-methyltransferase.

The RNA capping process in coronaviruses involves several nonstructural proteins including nonstructural protein 16 (nsp16) -- a ribose 2'-oxygen methyltransferase. Nsp16 forms a complex with nsp10 to convert viral mRNA cap-0 structures to a cap-1 via methylation of the 2'-oxygen of the first nucleotide of newly formed mRNA using S-adenosyl methionine (SAM).

Previously, crystal structures of SARS-CoV nsp16/nsp10 in complex with SAM without an RNA cap have been reported. However, to understand the full implications of mRNA capping in coronaviruses in antiviral therapies, a high-resolution structure of SARS-CoV-2 nsp16/nsp10 in complex with the methyl donor, SAM, and its target, RNA cap m7GpppNm, is required.

Researchers from the University of Texas (UT) Health Science Center at San Antonio were able to demonstrate how nsp16 specifically binds and methylates coronavirus RNA. The resolved high-resolution x-ray crystallography structure also shows the conformational changes of catalytic nsp16 during RNA cap-binding. The enzyme transitions from a binary to a ternary state, thereby enabling the addition of the cap-1 structure.

"It's a camouflage," said lead author Yogesh Gupta, PhD, from the Joe R. and Teresa Lozano Long School of Medicine at UT Health San Antonio, in a statement. "Because of the modifications, which fool the cell, the resulting viral mRNA is now considered as part of the cell's own code and not foreign."

A Cys209 in the beta-9 strand of nsp16 in SARS-CoV-2 is not found in any other coronavirus strains that the researchers evaluated. Since this residue exists at the end of the strand of the RNA cap, it may influence RNA cap-binding and allow for ligand binding at alternative sites.

Furthermore, the researchers found that several mutations observed in SARS-CoV-2 could facilitate small-molecule ligand binding in a pocket outside of the SAM-binding pocket. The team proposed that this region could present a unique ability to bind small molecules outside the catalytic pocket and provide a new target for antiviral drug development.

Deciphering the 3D structure of nsp16 of SARS-CoV-2 will help inform rational drug design of antiviral drugs to combat emerging viral diseases, such as COVID-19, according to the authors. Small molecule drugs that could prevent nsp16 from adding cap-1 structures to its RNA could inhibit viral replication and allow the virus to be detected by the host's immune system.

Do you have a unique perspective on your research related to molecular biology or virology? Contact the editor today to learn more. 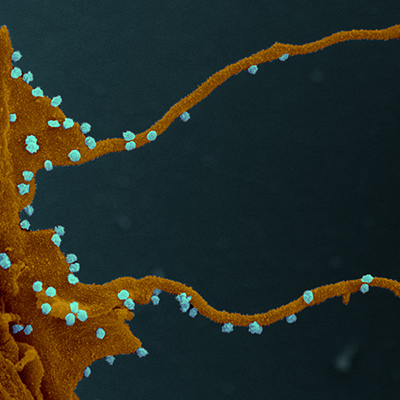