February 13, 2020 -- A new technology enables genetically engineered probiotic bacteria to be used as an efficacious, stable, and safe platform to deliver immunotherapies directly into a variety of tumors in just a single dose. The research was published online on February 12 in Science Translational Medicine.

Cancer cells use immune checkpoint proteins, which control immune responses in the body, to prevent T cells from destroying them. Immune checkpoint inhibitors, which block checkpoint proteins such as programmed cell death ligand 1 (PD-L1) and cytotoxic T-lymphocyte-associated protein-4 (CTLA-4), are used as immunotherapies. However, systemic delivery of these treatments has several limitations and adverse effects.

In this new study, researchers from Columbia University discussed their technique for engineering probiotics that are continuously released by bacteria and continue to attack tumors after just one dose, facilitating an immune response that leads to tumor regression.

"We wanted to engineer a safe probiotic vehicle capable of delivering immune checkpoint therapies locally to minimize side effects," said Tal Danino, PhD, assistant professor of biomedical engineering at Columbia, in a statement. "We also wanted to broaden the versatility of the system by producing a range of immunotherapeutic combinations, including cytokines that could further elicit antitumor immunity, but are otherwise difficult to systemically deliver because of toxicity concerns."

The researchers started by selecting a camelid single-domain antibody fragment, a nanobody, that blocks PD-L1 or CTLA-4 as the therapeutic cargo. This nanoparticle was chosen from the Research Collaboratory for Structural Bioinformatics Protein Data Bank (RCSB PDB).

Nanoparticles have several benefits, including their small size, which allows increased diffusion within the tumor microenvironment. Nanoparticles are also cleared more rapidly from the bloodstream through glomerular filtration, thereby reducing off-target effects.

The plasmids were combined into one and then transformed into the probiotic strain, Escherichia coli Nissle 1917, containing a genomically integrated luxCDABE gene for bacterial tracking in vivo (EcN-lux). This probiotic strain has been proven safe, is currently prescribed for oral administration in humans, and is easily genetically manipulated for the delivery of cancer therapeutics.

The researchers sought to maximize the therapeutic efficacy by optimizing a synchronized lysis circuit whereby a bacterial population lyses once a critical density or quorum is reached, effectively releasing its therapeutic payload at the target. Here, the quorum-sensing plux promoter drives transcription of the quorum-sensing gene, luxI, and the phage-derived lysis gene, ϕX174E. They termed the resulting strain of bacteria synchronized lysing integrated circuit (SLIC).

Testing this system with in vivo lymphoma mouse models, the authors observed an increase in the frequency of activated CD8+ T cells and CD4+ T cells in SLIC treated tumors and a decrease in the frequency of regulatory T cells compared to untreated tumors. They hypothesized that the observed therapeutic difference between the traditional immunotherapies and probiotic therapies is due to the probiotic's ability to continuously target CTLA-4 and PD-L1, thereby circumventing the need for multiple injections vital for antibody therapy success. Indeed, they found integrated lysis operon and continued targeting for multiple weeks after a single treatment. 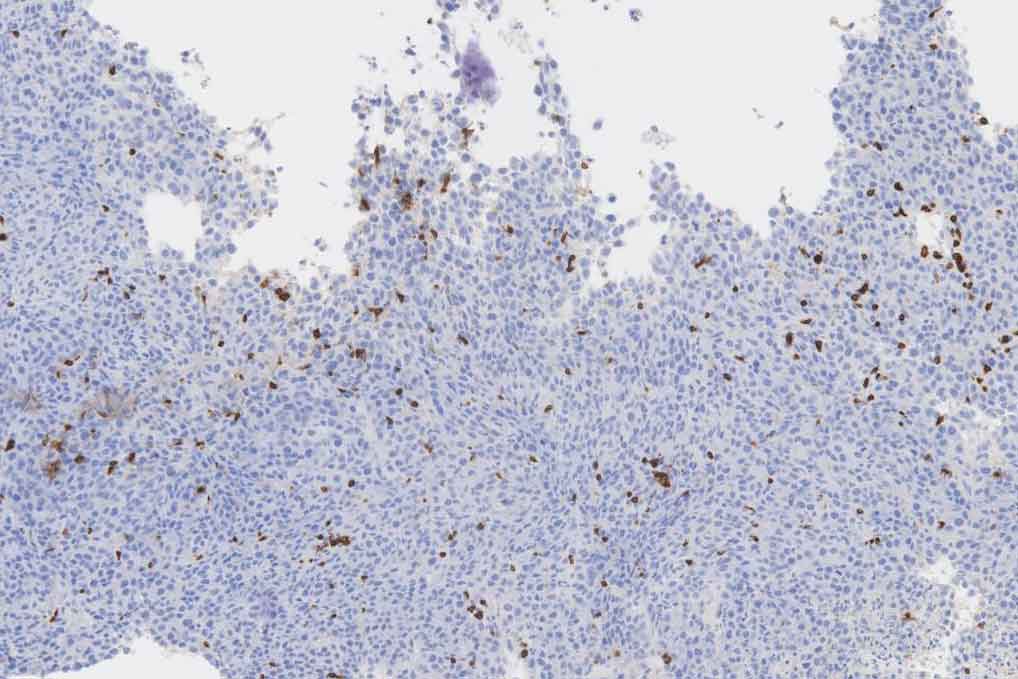 Immunohistochemistry staining of T-cell populations in colorectal tumor tissue. Image courtesy of Piper Treuting and the University of Washington.

"We have demonstrated that the engineered bacteria remain functional and localized within the tumor as the bacteria grow in mice for at least two weeks after treatment, preventing the microbes from affecting healthy tissue," said doctoral student Candice Gurbatri.

Leveraging the versatility of this system, the researchers sought to treat more difficult cancers, like colorectal cancer, that have been less responsive to traditional immunotherapies. They observed a markedly enhanced effect of our probiotic system, resulting in tumor clearance and prolonged survival when compared with animals treated with the antibody combination.

"We showed that a triple combination of immunotherapies could effectively reduce tumor growth in a cancer that is generally less responsive to immunotherapy," Gurbatri said. "We've demonstrated that one dose of our probiotic therapy results in continuous localized drug release and clearance of the bacteria population once tumors have cleared. These elements could be particularly beneficial in a clinical setting, where patients want and need minimally invasive and self-sustained therapies."


Do you have a unique perspective on your research related to immunology or cancer biology? Contact the editor today to learn more.

If you like this content, please share it with a colleague!
Related Reading
Math models improve the effectiveness of immunotherapy
Scientists working at the intersection of math and medicine propose new strategies based on mathematical modeling and known molecular mechanisms to improve...
Dietary probiotics show potential to reverse Parkinson's symptoms
Roundworms that were fed a commercially available dietary probiotic showed less buildup of proteins that form during the progression of Parkinson's disease...
Nanoparticles direct 'suicide genes' to treat brain tumors in children
Researchers from Johns Hopkins University report a bioengineered nanoparticle that successfully delivers a "suicide gene" to pediatric brain tumor cells...
Copyright © 2020 scienceboard.net