July 8, 2019 -- Understanding global perceptions and knowledge of science is of growing interest to the scientific community. Organizations such as 3M, with their State of Science Index Survey and the Wellcome Global Monitor (WGM), from the Wellcome Foundation and Gallup World Poll, explore attitudes towards science and medicine, and also confidence in scientists themselves.

Cases of skepticism in science include parents hesitating to vaccinate their children, a rise in pseudoscience, to a persistent back-and-forth on climate change. However, according to the WGM study published in June 2019, scientists, doctors and nurses enjoy a high level of trust globally. The WGM study surveyed over 140,000 individuals, in 140 languages, living in over 140 countries. Of concern in this study, over half the world know little about science, and about one in five individuals feel excluded from the benefits of science.

The WGM study reveals a high overall global trust (72%) in scientists and healthcare professionals, but notes troubling trends, such as a loss in confidence in vaccine safety in higher income countries. Overall, the public’s engagement with science is influenced by a combination of culture, context and background, suggesting that scientists need to keep this diversity of attitudes to science and health in mind when engaging with the public.

How well do individuals understand science? 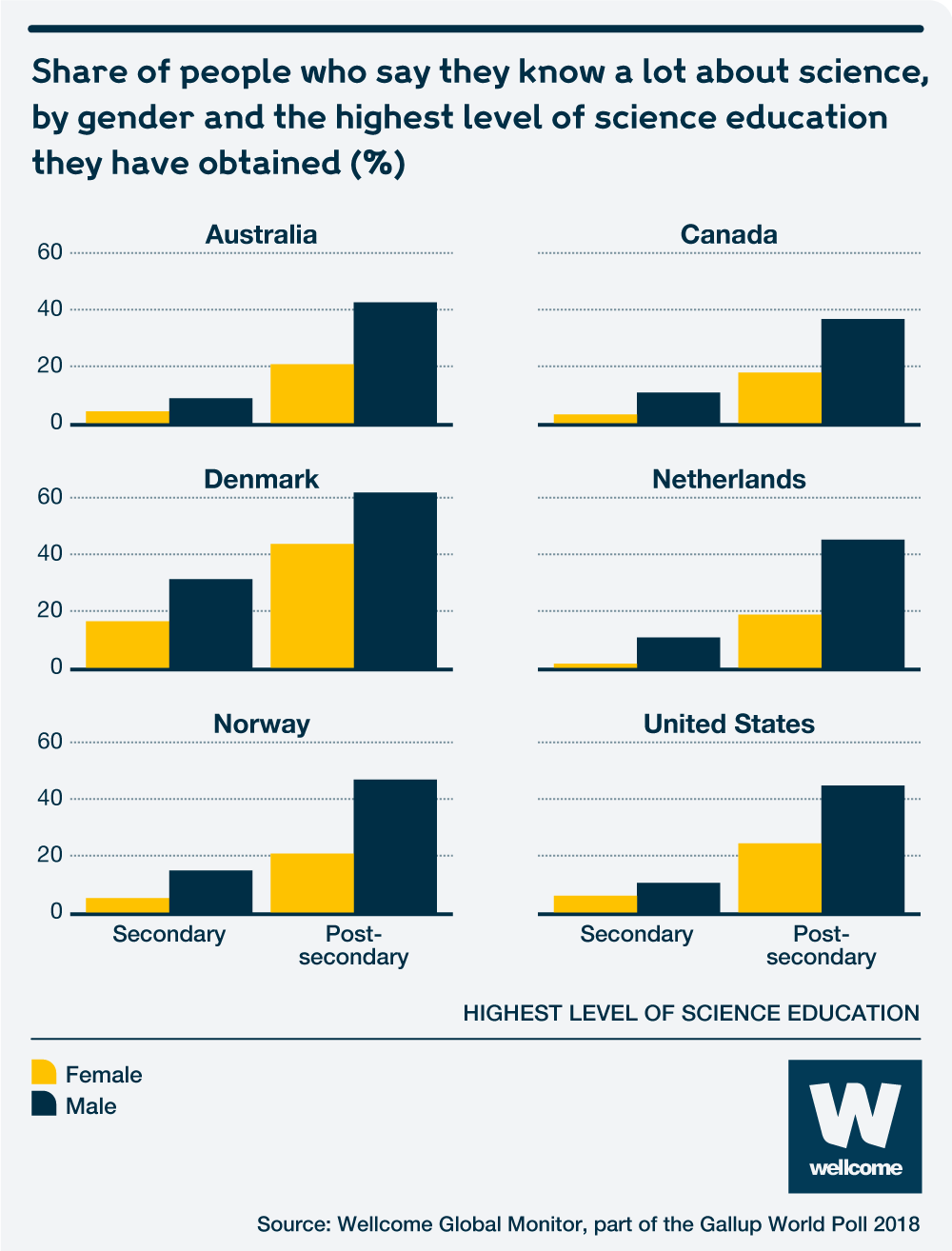 Overall, around 40% of people reported having a lot or some knowledge about science. Perhaps unsurprisingly, it’s younger people (aged 15-29) and those living in high-income countries who tended to rate their science knowledge more highly. In nearly every region, when comparing across similar years of education, men were significantly more likely (49%) to say they knew some or a lot about science compared to women (38%). This gender gap was the greatest in Northern Europe (75% versus 58%), but was negligible with a difference of only 3-4% in three regions: the Middle East, South America and Southeast Asia. The WGM study suggests that this gender gap may be due to social norms or a difference in levels of confidence between men and women.

How much do individuals trust science and medical professionals?

Globally, a majority of people have medium (54%) or high (18%) trust in scientists. The most important predictor of trust in scientists was whether the individual had learned science at school, followed by their level of confidence in national institutions. Other factors that significantly influenced trust in scientists, included income, level of science education, area of residence (rural or urban), and their level of confidence in other societal institutions in their country (such as the government or military). As for science in society, 70% of people around the world feel that science benefits people like them. Low trust in scientists was most common in Central Africa, Southern Africa and South America, regions where people were also least likely to believe that science benefits society, and felt excluded from the benefits of science. Similarly, individuals have medium (43%) or high (41%) trust in doctors and nurses, while 13% have not much or no trust. There was no difference in confidence levels in hospitals across high and low-income countries, but across the world, those with lower household incomes were likely to have less confidence in healthcare systems. Moreover, while no clear relationship was found between levels of science education and vaccine confidence, people who trust doctors and nurses more than any other source of information were more likely (72-81%) to agree that vaccines are safe across the world.

Earlier this year, 3M released their annual State of Science Index, where a survey of 14,000 globally revealed that scientists as seen as credible but not approachable, and that one in three people (35%) are skeptical about science.The WGM different from other perception surveys because of its global scale. The findings of the study, and other studies such as the 3M Index, can be used to inform the public and decision makers and gain trust from the public.

What’s the next step in building awareness and confidence in science?

Studies like the WGM and the State of Science Index can be crucial tools to navigating conversations between the scientific community, the public and policy makers to help inform personal and community-wide decisions. When these groups of individuals work together, with a solid foundation of science and understanding, then we can make progress in increases scientific literacy and improving the quality of life in our society.

What do you think is the next step in building scientific trust? How can you make progress in your personal situation?