March 11, 2022 -- Scientists have shown that it is possible to regulate dormant genes by combining CRISPR technology with a protein designed with artificial intelligence (AI). The finding, published recently in Cell Reports, has the potential to be an epigenetic tool in biomedical research and used as a therapeutic approach for a wide range of diseases.

It is known that upstream areas of developmental genes are decorated with H3K27me3 marks that are needed for the bifurcation of cellular fates, a significant process in development. However, because targeting PRC2 inhibition to specific chromosomal locations was not possible, the definite genetic sites at which PRC2 functions that determine cell fate remained unknown.

In the current study, led by Shiri Levy, PhD, a postdoctoral fellow at the University of Washington Institute for Stem Cell and Regenerative Medicine, the scientists identified critical PRC2 functional sites that influence H3K27me3 marks.

"Here, we develop a system for the targeted inhibition of PRC2 that can identify the precise nucleosomes that require H3K27me3 marks for transcription repression," the authors wrote. 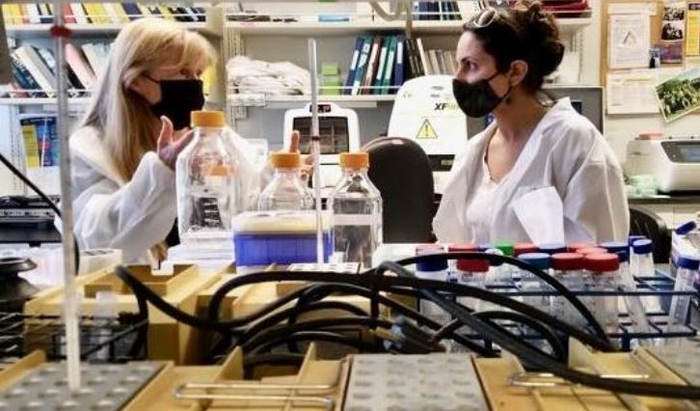 Hannele Ruohola Baker and Shiri Levy discuss a new technique for awakening silenced genes in the Ruohola Baker lab at the University of Washington School of Medicine.

In spite of a wide range of tools available to modify the epigenome, currently there is no method to inhibit PRC2 function at a specific genomic site and specifically at a single nucleosome for identifying the exact H3K27me3 marks for transcriptional repression, according to the authors (Cell Reports, March 1, 2022, Vol 38:9).

The researchers developed a computer-designed protein that binds EED (EED binder [EB]) and competes with EZH2. Fusing EB to dCas9 (EBdCas9) enabled probing H3K27me3 function at precise gene sites. The research showed that EBdCas9, a PRC2-inhibiting tool, enables the study of epigenomic memory of PRC2 at specific sites. Additionally, the study showed the wide ranging applicability of EBdCas9 by determining the site where PRC2 disruption stimulates transcription of bivalent genes.

In total, 26 specific sites were targeted during the research in promoter regions upstream of four different genes and there was significant PRC2-dependent transcriptional derepression at eight sites.

The results of the study highlighted that the AI-designed protein EBdCas9 with apt guide RNA (gRNA) can indeed inhibit PRC2 at precise genetic sites, allowing it to target and inhibit PRC2 at a single nucleosome level to decrease H3K27me3 at specific, targeted sites, to induce targeted transcription, to mediate spreading of remodeled epigenomics, and to create epigenomic memory.

Moreover, it also led to the discovery of functional distal TATA box and TATA binding protein (TBP) >500 bp of the transcription start site (TSS), the modification of cell functionality, transdifferentiation of one cell fate to another, and the decrease of tumor cells.

One of the critical findings of this study is that most broad H3K27me3 marks on promoter sites appear not differentiated.

The approach of targeting PRC2 inhibition by EBdCas9 identifies functional H3K27me3 marks and mediates gene activation and has the potential as an epigenetic tool in biomedical research. It has therapeutic implications for several diseases, including cancer without manipulation of endogenous gene sequences.

The approach will allow researchers to understand the role individual genes play in normal cell growth and development, in aging, and in such diseases as cancer, Levy said.

"The beauty of this approach is we can safely upregulate specific genes to affect cell activity without permanently changing the genome and cause unintended mistakes," Levy said.