The Role of Microscopy in Surface Science

October 17, 2018 -- Surface science technologies include instruments involved in analyzing and observing the chemical and physical surface properties of a material, especially through the use of various microscopy techniques. At The Science Advisory Board, we examined industry growth for optical, electron, scanning probe, confocal & advanced microscopes, as well as surface analyzers. Advanced techniques such as super-resolution microscopy and digital microscopes are shaping this field, which we project to grow by 5.6% annually through 2020. 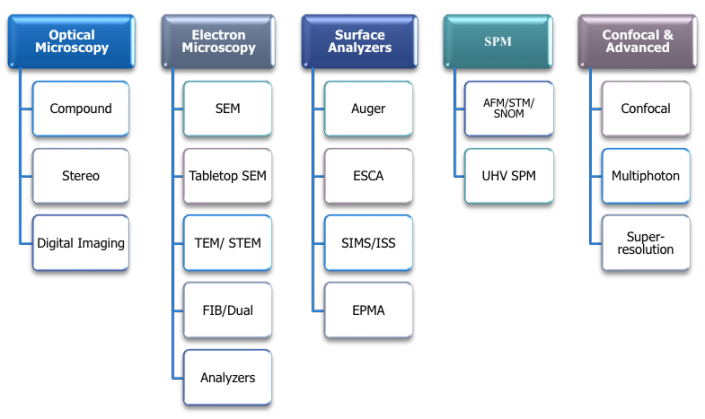 Microscopy has long been described as the “eyes of science,” but new technologies are elevating the technique’s importance in both physical and life science research as well as many areas of manufacturing. Today’s advanced microscopes are not only characterizing nano- and bio-structures but are also being used to image processes as they take place in situ.

Generally speaking, the surface science encompasses three broad areas: life science, industrial and geology with the nature of the required optics and accessory modules differing across the diverse applications in each segment. The industrial sector is the largest source of demand, representing 38% of the total market.

Indeed, the semiconductor industry employs the widest variety of surface science techniques to measure the thickness, density, and composition of materials and identify impurities. That said, identifying defects, analyzing or predicting materials failure, detecting contaminants and profiling the depth of materials are all other applications found in energy, polymer, mining/metallurgy, and food manufacturing environments.

A great deal of attention has also been drawn to the advances in life science research made possible by microscopy which enable the visualization of individual molecules, whole tissues and organisms. Life scientists can study single snapshots or observe changes using time-lapse recordings that span milliseconds to days. There is special excitement surrounding functional brain imaging due to recent efforts to map the brain connectome and the US federal government’s funding of the BRAIN Initiative, set to receive a 73% boost in funding in the recently passed omnibus spending bill. Optogenetics is another area where microscopes are also used to illuminate a sample with light in precisely sculpted patterns of space, time, wavelength, and polarization. Light-responsive proteins enable scientists to turn neurons on or off selectively with unprecedented precision and introduce them into cultured cells or the brains of live animals to study the structure and function of neural networks.

Carl Zeiss, FEI (a Thermo Fisher company), Leica (Danaher), Nikon, and Olympus continue to be significant players in the sector, with other companies such as Hitachi, Oxford Instruments, Bruker, and AMETEK active in specific niches. Modularity has emerged as a key competitive factor for these companies. In addition, microscopy manufacturers must also compete on product performance features such as optical quality and contrast features but opportunities for technological differentiation are declining. In this highly competitive sphere, distribution channels, price, installation, training, and repair are increasingly important.

Do you analyze materials surfaces in your research? What kind of micrscopy is useful to your studies? Join the discussion in our Forums.