Gene amplification can be responsible for functional innovation in bacteria

March 10, 2020 -- Researchers have gained a greater understanding of how gene amplifications rapidly tune levels of gene expression when gene regulation is required but when no other molecular regulatory mechanisms are in place. This research was published in Nature Ecology & Evolution on March 9.

Gene regulatory networks have evolved to help organisms adjust to environmental changes. However, gene regulation is a complex process that requires many components, including transcription factors and promoter sequences in DNA. These are acquired by single-point mutations that rarely occur and take a long time to develop into full mechanisms.

Alternatively, researchers from the Institute of Science and Technology Austria and the University of Liverpool in the U.K. believe that gene copy number might provide a fundamentally different strategy to adapt to environmental changes.

Gene duplications do not depend on existing regulation, nor do they require regulation to evolve. Rather, they arise by homologous recombination between sister chromosomes. Duplication rates vary among bacteria, but at any given time a large fraction of a typical bacterial population will contain cells carrying duplications.

However, duplications are unstable, and crossover events at any time during replication could lead to deletion of the second copy of a gene -- and restoration of the original state -- or further amplification.

"We looked at over 40 generations of individual bacteria and visualized these duplications, but we also saw that they are quite unstable: The second copy of a gene may be amplified further in the next generations to come and thus lead to large copy numbers, but the duplication may also be deleted again right away, and the individual falls back to the original single-gene state," said Isabella Tomanek, a doctoral student at the Institute of Science and Technology (IST) Austria, in a statement.

In the case of gene amplification, if that gene is under selection, it can substantially increase the organismal fitness via increased gene copy number. Amplifications can provide fast adaptation and facilitate functional innovation, as any extra gene copy boosts the expression of a gene. 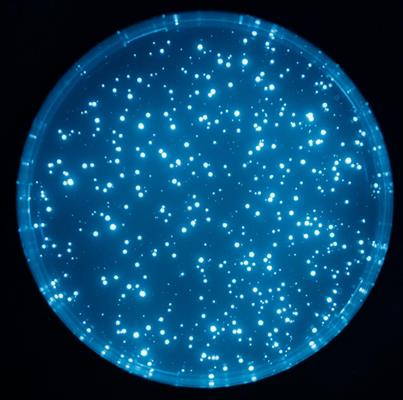 The researchers constructed a reporter gene cassette to monitor expression and copy number changes of galK. A promoterless galK gene was transcriptionally fused to a yellow fluorescence protein gene, which reports on galK expression and an independently transcribed cyan fluorescence protein gene provided an estimate of the copy number of the whole cassette. They observed that the populations tuned their gene expression to the two environments as needed.

"Most notably, the copy/paste and delete strategy comes into effect on ecological timescales, i.e., before slower evolutionary solutions like gene regulation on the level of single cells can evolve by adaptation through point mutations," said Rok Grah, a doctoral student at IST Austria, in a statement. "And, as we could show in our model, since any genomic region can basically be amplified, the described mechanism can not only act on any bacterial gene but is also applicable, in principle, to any other organism."

Unlike other bet-hedging strategies characterized by switching between a small number of alternative phenotypic states -- here, only a fraction of the population grows after environmental changes, cells differ in genotype due to intrinsic instability of gene amplifications, and growth responses can be graded due to a wide range of copy numbers.

Gene amplifications can also confer resistance to antibiotics, leading to heteroresistance, and even to failure of antibiotic treatments. Moreover, changes in copy number are difficult to track using next-generation sequencing, as they appear and disappear without leaving any traces in the genome. Fundamental knowledge of this gene amplification mechanism for bacterial survival may be more important in tackling antibiotic resistance than previously appreciated.


Do you have a unique perspective on your research related to bacteriology and microbiology? Contact the editor today to learn more.

If you like this content, please share it with a colleague!
Related Reading
Artificial intelligence helps researchers find new antibiotics
To address antibiotic resistance, researchers have developed a machine-learning approach that can search millions of known chemicals to find new...
Bacterial evolution reveals method to fight antibacterial resistance
Different types of bacteria have evolved to develop unique mechanisms for achieving the same antibacterial function -- a finding that could lead to new...
Orphan immunity gene clusters acquired for protection
Researchers from the University of Washington School of Medicine and Howard Hughes Institute found that gut bacteria acquire interbacterial defense gene...
Copyright © 2020 scienceboard.net