March 5, 2020 -- Researchers have long known that the uptake systems in clonal cells can differ based on their environments. Scientists reported their observations of this amino acid uptake pathway in bacteria for the first time in a new study published March 5 in Nature Communications.

Auxotrophy is the inability to produce an organic compound essential for growth and is a characteristic common among many bacteria, which often rely on their environment to obtain missing compounds. Auxotrophy shapes interactions between communities of bacterial cells by necessitating syntrophic cross-feeding interactions and the exchange of amino acids. Therefore, it is likely to play a role in determining the composition and stability of microbial communities. 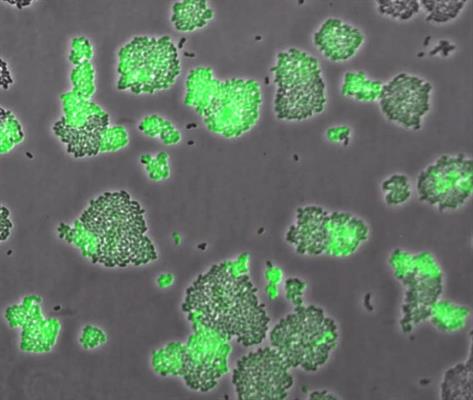 Image shows individual cells that express either the high-affinity methionine transporter (bright green) or the low-affinity transporter (dark). Image courtesy of the University of Groningen.

The researchers postulate that L. lactis uses long-term phenotypic heterogeneity in a strategy to rapidly adapt to shifted environments without the need for genetic mutation. As the term suggests, it describes different mutations in the same gene that can sometimes give rise to strikingly different phenotypes. In this case, expression of high-affinity Met transporter. According to the authors, this is the first study that shows regulation at the RNA level that can give rise to phenotypic heterogeneity.

Why is methionine uptake heterogeneously expressed?

"We do know that heterogeneity is a good thing for bacteria," concluded Oscar Kuipers, PhD, a professor of molecular genetics at the University of Groningen, in a statement. "By splitting into two populations, you can better anticipate changes in the environment. That is always a smart strategy."


Do you have a unique perspective on your research related to microbiology or metabolism research? Contact the editor today to learn more.

If you like this content, please share it with a colleague!
Related Reading
Research sheds light on how bacteria 'take one for the team'
It's already known that bacteria under assault by phages can occasionally program themselves to die before they become infected. But a pair of new papers...
Bacterial evolution reveals method to fight antibacterial resistance
Different types of bacteria have evolved to develop unique mechanisms for achieving the same antibacterial function -- a finding that could lead to new...
Finding the next generation of antibiotics may require the use of NGS sequencing and genome mining
Determining how antibiotic structures are formed in nature is crucial knowledge that scientists will leverage in the development of the next generation...
Copyright © 2020 scienceboard.net