March 11, 2020 -- Attendance was down at last week's Pittcon conference in Chicago, but organizers of the meeting for laboratory scientists may actually have been lucky that their show took place at all, given the wipeout of science and health meetings in March due to the coronavirus outbreak.

With one estimate suggesting that about 9,000 people were in attendance, turnout was sharply down at Pittcon 2020 compared with the 15,000 guests of a typical year. Several exhibitor booths in McCormick Place were empty, with signs indicating that companies were not attending due to travel restrictions.

Nonetheless, many presentations at Pittcon 2020 were well attended. The conference's technical program continues to expand in terms of subject matter and field. As in years' past, several symposia focused on developments in food testing, environmental analysis, and bioanalysis.

Among the highlights at Pittcon were sessions on machine learning in analytical chemistry, spatially resolved analysis of tissue function, and enhanced neuroanalytical measurements.

A scientific topic that has become one of the mainstays of Pittcon is cannabis testing. As part of symposia on emerging developments in cannabis science, Christopher Hudalla, PhD, founder and chief scientific officer of Massachusetts-based ProVerde Laboratories, presented a talk on analytical testing in the cannabis industry.

Hudalla discussed some of the new challenges cannabis labs are facing and noted several of the milestones that have been accomplished. Massachusetts was the first state to mandate analytical testing of cannabis and is among the states with the most challenging analytical limits. As a result, Hudalla's lab is at the frontlines of cannabis testing, particularly in testing for the complexity of cannabis contaminants.

In general, Hudalla observed that the cannabis industry is moving toward complying with good manufacturing practices standards and large-scale operations, with ISO 17025 (General Requirements for the Competence of Testing and Calibration Laboratories) being the standard for most states. As a result, the setting up a cannabis testing lab can be costly and complicated, as each analyte can be evaluated using one of multiple analytical approaches, depending on the required sensitivity.

The role of the lab for cannabis testing, as described by Hudalla, can include the following:

Trends within these areas include new product development and new health concerns. The most prominent of these concerns are vaping deaths and illness caused by electronic cigarette (e-cigarette), or vaping, product use-associated lung injury (EVALI). As of February 28, 68 deaths in the U.S. have been attributed to EVALI, with the presence of vitamin E acetate in e-liquids linked to the illness. 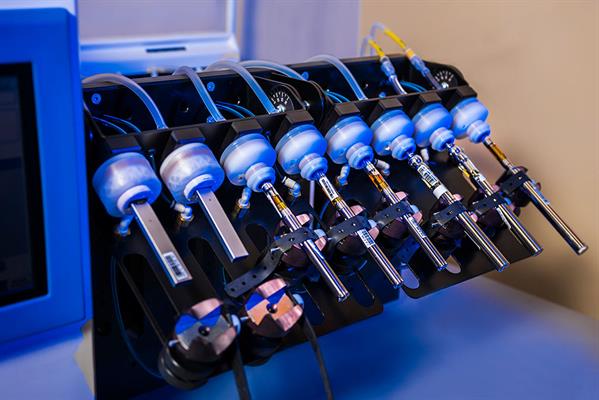 Work with e-cigarettes and vaping pens. Image courtesy of Lauren Bishop of the U.S. Centers for Disease Control and Prevention.

The EVALI outbreak is an example of the complexity of cannabis products and testing. As Hudalla stated, 152 different THC-containing liquid brands have been tied to EVALI. Regulations of electric nicotine delivery systems vary by state.

In addition, the banning of vapor cartridges has led to a black market, where products are available for sale that Hudalla deemed "horrific" in some cases. Making testing of vaping products particularly challenging is the number of components -- for example, e-liquids (which can contain THC, nicotine, and CBD oils), additives, cartridges, and heavy metal contaminants.

In the e-liquids themselves, contaminants such as pesticides, process solvents, additives, and flavorings can be found. In addition, cannabis extraction processes can create new isomer-related compounds.

Hudulla described a case in which an extract was shown to be 88% THC, begging the question: What is the remaining 12%? In the cartridge, for example, metal contaminants can be found in hardware resulting from the manufacturing process or in the vaporizer flow path due to metallic components. A further risk lies in the thermal degradation of the product and the chemical changes this can produce.

In a new development, water-soluble cannabis products are now available, such as cannabis water. To create such products, surfactant emulsions are used, resulting in so-called micro- or nanoemulsions -- terms that Hudulla described as more about marketing than science. His lab uses dynamic light scattering to measure the particle size of CBD nanoemulsions using ultrasheer technology to prepare samples. As a result, his lab has measured the zeta potential of particles to investigate shelf life due to degradation.

One upside of the complexity of cannabis testing is the demand for lab staff to keep up with testing demand, according to Hudulla. He listed some of the expertise needed: pesticide chemists, formulators, chemical engineers, food chemists, flavor chemists, microbiologists, and quality management experts.

This lab expertise will be needed as cannabis testing takes a more comprehensive approach to contaminant analysis that encompasses all facets from raw goods to consumer use, Hudalla believes.

"Producers need to consider all possible rates of contaminant introduction" when it comes to cannabis testing, Hudulla concluded.

If you like this content, please share it with a colleague!
Related Reading
Report: Coronavirus takes bite out of Pittcon attendance
Attendance at this week's Pittcon conference for laboratory scientists in Chicago is down sharply over concerns about the novel coronavirus, according...
Copyright © 2020 scienceboard.net