August 5, 2022 -- Mount Sinai researchers contend they have achieved an “unprecedented” understanding of the genetic and molecular mechanisms in human microglia, immune cells that reside in the brain, providing insights into how they contribute to the development and progression of Alzheimer’s disease.

Their study of fresh human brain tissue obtained through biopsy or autopsy from 150 donors was published August 5 in the journal Nature Genetics. Among their findings, researchers identified 21 candidate risk genes and highlighted one (SPI1) as a potential key regulator of microglia and Alzheimer's disease (AD) risk.

"We were able to fine-map multiple AD loci, not only identifying the relevant genes but also, in some cases, proposing the regulatory mechanisms contributing to disease, thus allowing further exploration of the genetic basis of particular neurodegenerative phenotypes. This resource provides an atlas of the human microglia regulome that can be leveraged to guide focused experiments in AD and other neurodegenerative diseases and understand the impact on transcription of a particular risk locus," state the authors.

While previous studies have identified microglia as playing a key role in the genetic risk and development of AD, little is known about the epigenetic mechanics of how that occurs and most previous studies have used either animal- or cell-line-based models, which do not reflect the true complexity of microglia function in the brain, according to the researchers.

To address these challenges, the Mount Sinai team used fresh brain tissue samples from biopsies and autopsies and were able to isolate high-quality microglia, providing "unprecedented insights into genetic regulation by reflecting the entire set of regulatory components of microglia in both healthy and neurodegenerative patients," Dr. Panos Roussos, PhD, director of the Center for Disease Neurogenomics at Mount Sinai's Icahn School of Medicine, said in a statement.

By comparing epigenetic, gene expression, and genetic information from the samples of both AD and healthy aged patients, researchers were able to comprehensively describe how microglia functions are genetically regulated in humans. Roussos credited single-cell analysis by his lab of microglia using highly sophisticated instruments for uncovering the unique interactions between different types of immune cells in the brain and its periphery that are related to neurodegenerative diseases like Alzheimer's.

Roussos contends their study is the largest human fresh-tissue microglia analysis to date of genetic risk factors that might predispose individuals to Alzheimer's disease and that the insights they gained in understanding the molecular and genetic mechanisms involved in microglia function "could, in turn, pave the way for novel therapeutic interventions for a disease that currently has no effective treatments." 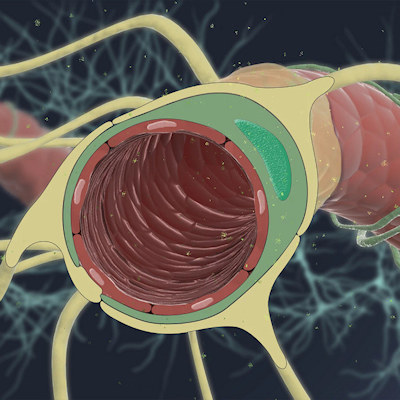