March 4, 2020 -- New Z-loops -- DNA folded into a zigzag structure and guided by essential condensin proteins -- have been caught on camera for the first time. The results of the study provide insight into the organization of chromosomes and were published in Nature on March 4.

A research team at Delft University of Technology (TU Delft) in the Netherlands previously discovered that condensin protein extrudes a loop in DNA in a process called loop extrusion. Now the researchers, led by Cees Dekker, PhD, are conducting follow-up studies that show that this is not the only way condensin interacts with DNA. They discovered a new loop structure using time-lapse single-molecule visualization. 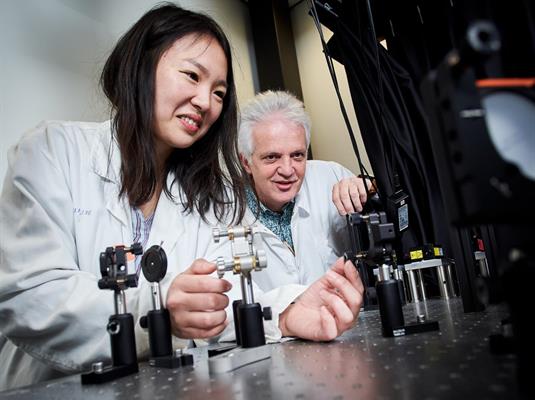 The data revealed that condensins can reshuffle individual DNA loop sizes and traverse one another to form dimeric motors that reel in DNA from both sides, forming a distinctive form of condensed DNA. The researchers tethered the ends of a DNA molecule and added fluorescently tagged condensin. Applying an in-plane buffer flow to the system allowed them to observe how the loops were formed.

Decker and colleagues found that the DNA loops can influence each other and can sometimes change their size by slippage. This process causes some DNA loops to shrink over 70% at the benefit of a second growing DNA loop. However, this mechanism leaves gaps between the loops.

The predominant structure formed was a higher-order structure that appeared as an elongated line of high fluorescence intensity with a single condensin located at both edges. The researchers named this a Z-loop, as its shape resembles the letter Z. Once formed, Z-loops are even more stable than single loops. Z-loops are capable of filling gaps left behind from slippage.

"The creation of a Z-shaped structure begins when one condensin lands on DNA and makes a single loop" explained Dekker, a professor in the department of bionanoscience and the Kavli Institute of Nanoscience Delft at TU Delft, in a statement. "Then, a second condensin binds within that loop and starts to make its own loop, creating a loop in a loop. When the two condensins meet during their tug-of-war, something surprising happens: The second condensin hops over the first one and grabs the DNA outside the loop, continuing its way along the DNA."

These interactions between condensin and DNA may affect the fundamental understanding of chromosome organization. They may also help researchers understand the role of SMC proteins and condensin in related hereditary disorders such as Cornelia de Lange syndrome. Moreover, since condensin is also crucial to chromosome organization during mitosis, errors in the process may lead to cancer. A better understanding of the underlying molecular mechanisms will be essential to combating serious diseases in the future.


Do you have a unique perspective on your research related to molecular biology or genomics? Contact the editor today to learn more.

If you like this content, please share it with a colleague!
Related Reading
Extra copies of chromosomes can be good or bad
Researchers are developing human cell lines to explore how extra copies of chromosomes can enhance the metastasis and invasiveness of cancer cells. They...
New method reveals 3D DNA structure
The scientist who developed a new method of illuminating 3D genomic structures, called Dip-C, is awarded the SciLifeLab Prize for Young Scientists by...
Copyright © 2020 scienceboard.net