Viral geometry mystery solved, or at least they have a theory

September 27, 2019 -- A new theory, published in Nature Communications on September 27, accurately predicts the positions of proteins within icosahedral (twenty-sided) protein containers of viruses. Researchers at the University of York in the UK and San Diego State University in the US state that this discovery revolutionizes scientific understanding of how viruses form, evolve and infect hosts. 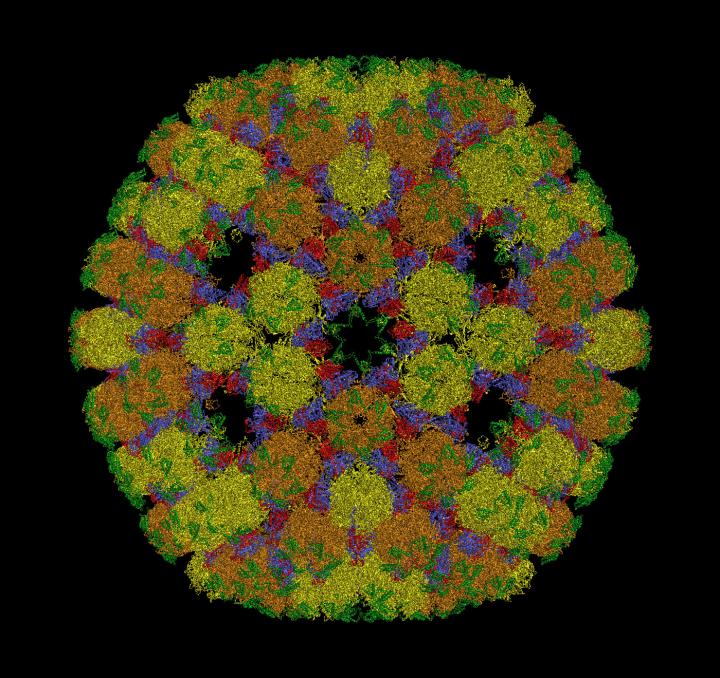 Viruses store and protein their genetic materials within capsids, protein containers which vary in size and structural complexity. Geometric constraints of these containers with implications on viral evolution is an open question in virology. Most viruses characteristically use polyhedral designs with icosahedral symmetry. This symmetric architecture maximizes volume while reducing the cost of coding. According to the Caspar and Klug theory, smaller relative portions of genomic sequences in icosahedral structures allows for the formation of larger viruses with a greater coding capacity for other viral components which enable more complex infection scenarios.

However, imaging improvements have now enabled researchers to view viral particles in high resolution. It is apparent that all viruses do not fit the Caspar and Klug description. Therefore, the researchers used Archimedean lattices to derive and explain outliers from the Caspar Klug theory. Using complex mathematical predictions, they determined that icosahedral and octahedral architectures are dependent on Archimedean lattices. Moreover, capsid surface structures that compose the lattices have a blueprint with the same number of proteins and architectures among different viral lineages.

"Our study represents a quantum leap forward in the field of structural virology, and closes gaps in our understanding of the structures of many viruses that are ill-described by the existing framework" said Reidun Twarock, mathematical biologist at the University of York and member of the York Cross-disciplinary Centre for Systems Analysis.

"This theory will help scientists to analyze the physical properties of viruses, such as their stability, which is important for a better understanding of the mechanism of infection. Such insights can then be exploited for the development of novel antiviral strategies. In particular, the structures of larger and more complex viruses that are formed from multiple different components were previously not well understood.

"Our over-arching scheme reveals container architectures with protein numbers that are excluded by the current framework, and thus closes the size gaps in Caspar Klug theory. The new blueprints also provide a new perspective on viral evolution, suggesting novel routes in which larger and more complex viruses may have evolved from simple ones at evolutionary timescales."

The lattices described in the report could have important applications in nanotechnology and biomedicine, according to the authors. Researchers now have the tools and information necessary to build icosahedral protein nanostructures assembled from pentamer and trimers. These constructed structures can be used for vaccines, drug delivery, phage display, imaging, and beyond.


Do you have a unique perspective on your research related to structural virology? The Science Advisory Board wants to highlight your research. Contact the editor today to learn more.