Bacteria use 'belt and braces' defense system vs. bacteriophages

October 19, 2021 -- Researchers have shown how a plasmid in the bacterium Escherichia fergusonii uses a "belt and braces" approach to defend itself against bacteriophages. The breakthrough, published on October 18 in Nucleic Acids Research, could lead to new DNA-targeting biotechnology tools.

The research group characterized the layered phage defense system deployed by the multidrug-resistant pEFER plasmid in E. fergusonii. The bacterium shares 64% of its genome with Escherichia coli -- for which it is often confused -- and is an emerging human and animal pathogen, causing illnesses such as wound infections and urinary tract infections.

"We discovered that an atypically large BREX operon offers complementary protection against a broad range of phages when associated with the type IV GmrSD homologue, BrxU," the authors wrote, led by David Picton, PhD, of the department of biosciences at Durham University in the U.K.

Bacteria have evolved multiple ways to defend themselves against bacteriophages, and previous research has shown that their defense systems are clustered in defense islands.

In this study, the research team, consisting of scientists from Durham University in collaboration with the University of Liverpool, Northumbria University, and the New England Biolab, sought to understand how these defense systems interact to resist phage attacks. Understanding these defense systems can aid researchers in exploiting them to make novel biotechnology tools, including those for gene editing.

A 'belt and braces' approach to defense

Just as the human immune system has evolved to respond to infections, bacteria have been forced to evolve their immune systems that protect them from bacteriophages, their relentless viral predators. One such defense system, CRISPR-Cas, gained fame when it was harnessed as a tool for gene editing.

In the paper, the authors documented the interplay between two complementary defense systems, BREX and BrxU, against phages in the pEFER plasmid.

The first defense system, bacteriophage exclusion (BREX), provides complete resistance to a broad range of phages that do not have any modifications to their DNA. Specifically, BREX effector proteins work by recognizing unmethylated nonpalindromic BREX motifs in phage genomic DNA, at which point they block phage DNA replication.

The second system, BrxU, provides a second layer of defense against phages that have evolved to escape detection by BREX. BrxU is a type IV restriction enzyme that recognizes DNA modifications and targets specific sequences found on invading phages. The researchers showed how BrxU targets phages armed with methylation of the BREX motifs that protect it from BREX effector proteins.

The researchers were able to build an extremely detailed 3D picture of BrxU, at a scale of 2.12 Å, using diffraction data obtained from Diamond Light Source, the U.K.'s national synchrotron science facility in Oxfordshire. Uncovering the dimeric structure of BrxU revealed how it was able to utilize all common nucleotides and a wide selection of metals to cleave a range of methylated DNAs, providing BREX with a complementary layer of protection. 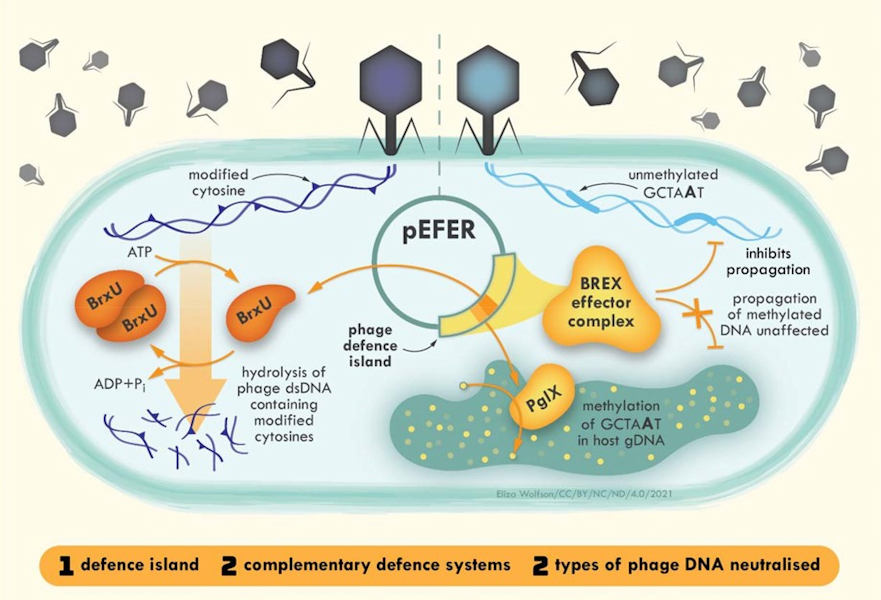 "Phages that have evolved to have modifications avoid targeting by BREX, but then can become susceptible to BrxU," the authors wrote. "This 'belt and braces' approach ensures better protection for the bacterial host."

A total of 30 different phages were used in the study, of which the pEFER plasmid was able to effectively defend against 22. The 30 naturally occurring phages were collected from freshwater sources around Durham and isolated by undergraduates participating in a microbiology workshop for the department of biosciences of Durham University.

The genes' bacterial defense mechanisms are often clustered in genomic "islands," suggesting the genes were acquired by horizontal gene transfer, a lateral transmission of DNA between unrelated species.

While previous research identified numerous bacterial "defense islands" in the bacterial genome housing multiple defense systems, it remained unclear until now how these systems interacted to provide a concerted level of protection against a wide range of attackers.

As scientists learn more about how defense islands work, this knowledge "may well lead to the discovery of even more diverse and complex interplays of defensive systems," the authors wrote.

In other words, it is likely that defense islands in the bacterial genome are just one part of an ongoing arms race between bacteria and phage, in which the phages reciprocate by evolving "counter-defense islands" to overcome the bacterial defenses. The authors cited the example of "anti-CRISPR," a group of proteins found in phages that inhibit the normal activity of the CRISPR-Cas defense system.

"The biochemical characterisation of reciprocal islands could expand our phage-derived arsenal of biotechnological tools even further," the authors concluded.

Future applications to the human epigenome

DNA modifications of the kind recognized by BrxU are found throughout the DNA of the human genome as part of an extra layer of epigenomic information, according to corresponding author Tim Blower, PhD, an associate professor and Lister Institute Prize Fellow in the Durham University Department of Biosciences.

"This extra layer of information, the 'epigenome', alters as we grow, and also changes in cases of cancer and neurodegenerative diseases," Blower said in a statement. "If we can develop BrxU as a biotechnological tool for mapping this epigenome, it will transform our understanding of the adaptive information controlling our growth and disease progression."

Do you have a unique perspective on your research related to genomics or biotechnology? Contact the editor today to learn more. 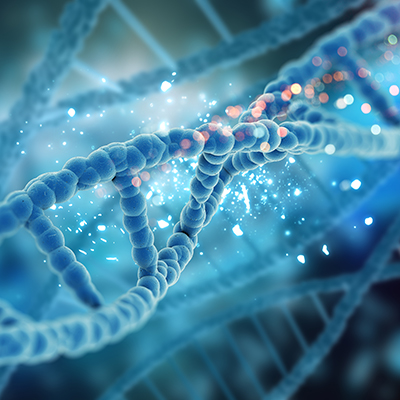 Potential of gene editing for clinical use highlighted at ASGCT 2021
From base editing to in vivo CRISPR therapeutics and CRISPR-modified bacteriophages, scientists discussed innovations in preclinical research that have...
Phages containing huge amounts of DNA are found around the globe
An inventory of over 350 DNA sequences from phage genomes revealed that these genomes can be over 200,000 base pairs in length and found the largest phage...
Copyright © 2021 scienceboard.net