CRISPR-based method can speed the identification of disease-causing genes

August 23, 2021 -- A new CRISPR gene-editing screening method can be used to link phenotype and genotype in animal models. The method was efficiently deployed in zebrafish and significantly reduced the time needed to evaluate the function of hundreds of genes, according to a paper published in Science on August 19.

Forward genetics, a molecular genetic approach used to determine the genetic basis responsible for a phenotype, is time- and labor-intensive. This approach requires the creation of model organisms, such as zebrafish -- which share a large portion of genes with humans -- that display the characteristic being studied. After breeding, mutants with desired phenotypes are isolated and genes are identified.

Reverse genetics approaches have the potential to alleviate some of the issues with forward genetics, but in the past, they have been hindered by severely limited throughput capabilities. In reverse genetics, the influence of a genetic sequence can be determined by analyzing cellular phenotypes. By selectively modifying genes, researchers can look for effects in the whole organism.

CRISPR techniques have been widely employed for reverse genetic approaches. However, targeting genes of interest is usually done one at a time with the use of guide RNA (gRNA), followed by injection of Cas9-gRNA ribonucleoprotein complexes into animal models. This results in the turning off of a single gene. If researchers want to target a different gene, they need to design an additional gRNA and inject it into a different organism.

"The process has always been focused on a single gene or a single modification at a time," said Randall Peterson, PhD, dean of the University of Utah Health's School of Pharmacy, in a statement. "So, if you want to do 100 genes, it's 100 times as much work."

The researchers began with a library of target gRNAs that address a specific scientific question. The platform uses microfluidics to generate nanoliter-sized droplets. Each droplet contains Cas9 multiplexed gRNAs targeting a gene of interest and a barcode associated with each target gene. The droplets are intermixed to cumulatively target hundreds to thousands of different genes.

The team injected the intermixed droplets into zebrafish embryos from a single needle. Hundreds of zebrafish embryos were raised; those exhibiting the phenotype(s) of interest were isolated, and the identities of perturbed genes were revealed by sequencing barcodes. 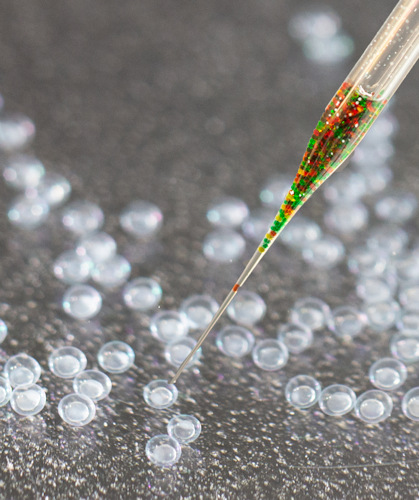 A glass needle filled with MIC-Drops (colored droplets) is used to inject fertilized zebrafish eggs (translucent spheres). The MIC-Drops are dyed different colors for easy visualization. MIC-Drops are one billionth of a liter in volume, and each one contains the materials needed to barcode and disrupt a single gene. Image courtesy of James Herron, Saba Parvez.

Previously, setting up a CRISPR screen of hundreds of genes in zebrafish would have taken a team of researchers many days and required hundreds of needles, explained postdoctoral researcher Saba Parvez, PhD, who developed and optimized MIC-Drop's packaging technique and barcoding system.

"Now, you have streamlined that process into one user doing it in a span of a couple of hours," said Parvez.

To test if MIC-Drop could identify the genes responsible for a particular phenotype, the researchers spiked droplets with gRNAs targeting the tyr (tyrosinase) or npas41 (neuronal PAS domain protein 2) genes into droplets containing other gRNAs, representing 2% of the total. The tyr gene is associated with albinism, and the npas41 gene is associated with the cloche phenotype (defective heart structures).

The scientists also used the platform to identify targets of optivin, a small-molecule agonist of the transient receptor potential cation channel, subfamily A, member 1b (trpa1b). The experiment revealed that the trpa1b genotype was largely responsible for disease phenotypes in zebrafish embryos.

Finally, to test if MIC-Drop could identify genes that contribute to specific aspects of cardiac development or function, the researchers evaluated 188 genes that have a potential role in heart development. After creating gRNAs targeting all 188 genes and introducing them to embryos, fish that developed heart defects were identified.

The DNA barcodes were used to identify 13 new genes with morphological phenotypes, which, when lost, resulted in a variety of specific cardiac or blood phenotypes, such as porphyria (heme disorder), arrhythmia, and abnormal cardiac development.

"Ultimately, people would like to be able to do genome-scale screening," said Peterson. "I think that scale actually becomes imaginable with this technology."

Do you have a unique perspective on your research related to molecular genetics? Contact the editor today to learn more. 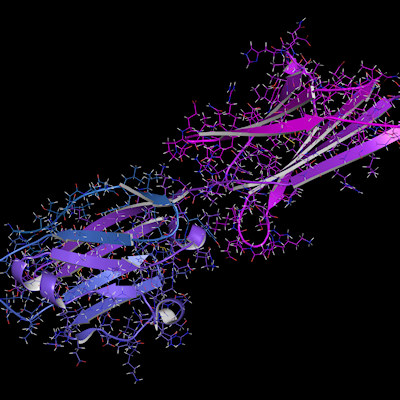