October 17, 2019 -- Researchers at Cold Spring Harbor Laboratory published a new study in Cell, on October 17, that introduces barcoded anatomy resolved by sequencing (BARseq), the next generation of MAPseq.

This multiplexed method is based on RNA barcoding for mapping projections of thousands of spatially resolved neurons in a single brain and relating those projections to other properties such as gene or cyclic recombinase (Cre) expression. The technology allows researchers to expand the brain map by accurately pinpointing the location of a neuron. It will also provide additional information about spatial organization, connectivity, gene expression, and physiological activity of neurons. 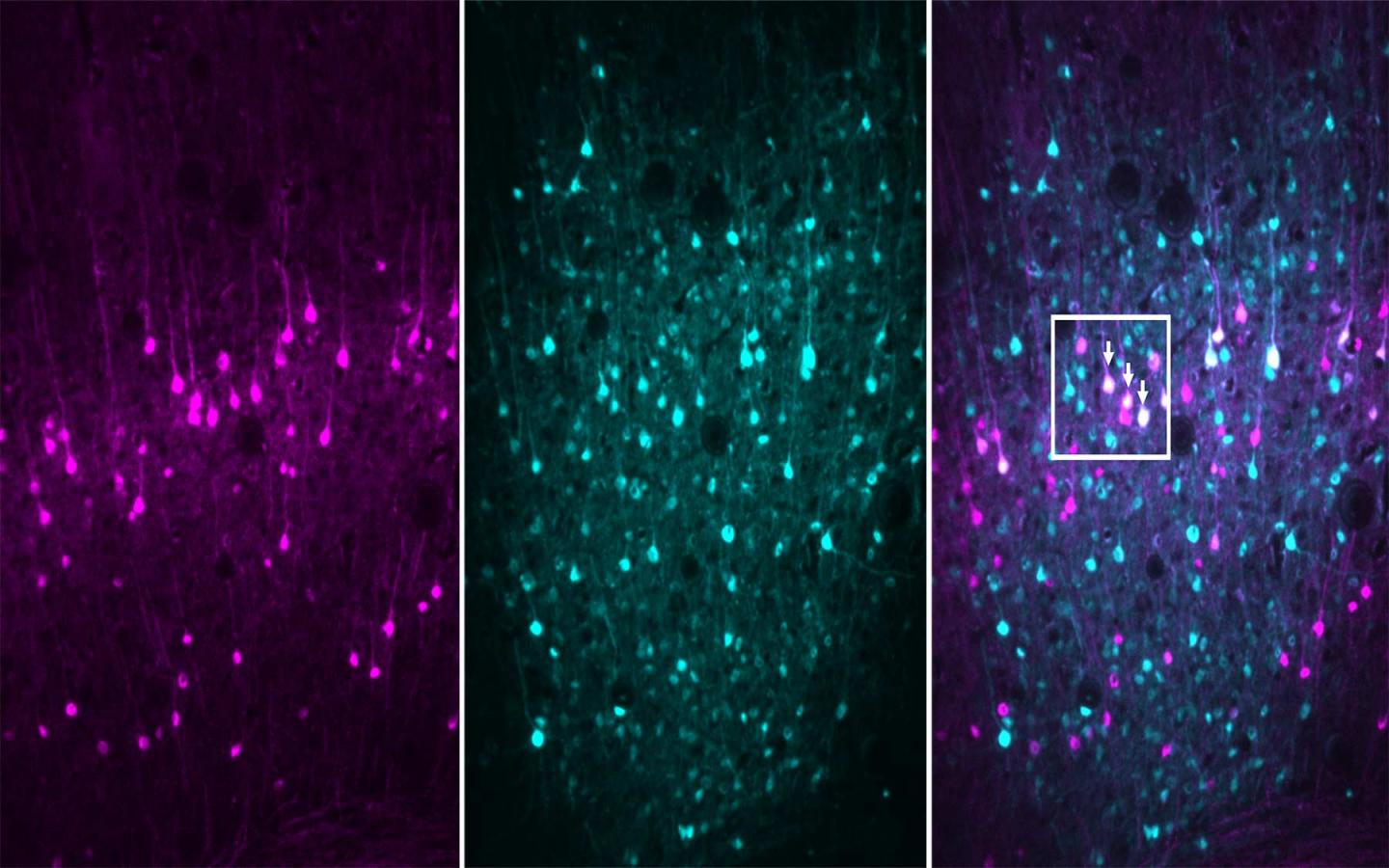 BARseq demonstrated in the auditory cortex of a mouse. Purple staining showed which neurons host activity of a specific gene (Fezf2). Green staining indicated the presence of a barcode label and show which neurons are communicating. Combined, this information helps neuroscientists classify neuronal types. Zador lab/CSHL, 2019

"The brain is basically a circuit. It's a bunch of neurons connected to one another," Zador said. "In order to make progress in neuroscience, we have to actually be able to understand how those neurons are connected to one another, and ideally to be able to relate them to other aspects of neural function, like gene expression and neuronal activity."

This work was generated out of the lab of Anthony Zador, a neuroscientist who has spent the last 10 years studying the how the brain's circuitry mediates and controls complex behaviors. His team developed MAPseq, a technique to map connections of different brain cells and gain a better understanding of have they interact. MAPseq was used to tag each neuron with a unique barcode made of genetic sequences. Researchers followed the tags as they traveled through the brain to see how a neuron connected to a pillar such as gene expression. However, MAPseq had limitations of low resolution due to a blurry map resulting from the mixture of cells and re-separation. This prevents researchers from being able to precisely locate neurons in the brain.

To address this concern, Zador and his team developed BARseq which solves the problem by allowing researchers to tag and sequence neurons in situ (at their original location in the brain). Using this technology, the team mapped 3,579 neurons in the auditory cortex of the brain. They were able to match connectivity patterns to gene expression and subsequently characterize different cell types and define their specific functions in the brain.

"If we could have a complete wiring diagram, a map, that would provide a foundation for understanding thought, consciousness, decision making and how those go awry in neuropsychiatric disorders like autism, schizophrenia, depression, OCD," Zador said.

This technology offers improvements in cost and time-savings than current mapping technologies. BARseq can provide pinpoint accuracy for where neural connections begins, but it can only predict a close estimate for where it ends. So, the team aims to refine BARseq in the future to achieve synaptic resolution for even clearer and more accurate mapping.

"Right now, I can tell you where a neuron sends its axons, but I can't tell you exactly which neurons it's forming synapses with," said Zador. "We still don't have enough spatial resolution at the destination. But we're working on it."


Do you have a unique perspective on your research related to neuroscience? Contact the editor today to learn more.


If you like this content, please share it with a colleague!
Related Reading
Dementia-associated atrophy predicted by brain networks
A new study uses brain maps to predict how brain atrophy spreads in patients with frontotemporal dementia (FTD). The experiment, conducted by UC San Francisco...
Super-resolution imaging characterizes individual synaptic proteins
It is now possible to rapidly image synaptic proteins at high-resolution thanks to a new technique developed by researchers at MIT and the Broad Institute...
A convergence of technologies, revolutionizing next-generation sequencing
A new, powerful combination of biochips and next-generation sequencing (NGS) is capable of solving unique and important biological problems, such as single-cell,...
Copyright © 2019 scienceboard.net