Can a single dose of a vaccine designed as 2 doses be effective?

March 9, 2021 -- Researchers suggested that two doses of a COVID-19 vaccine are more protective than a single dose, even if the interdose period is longer than recommended. The study's results, published in Science on March 9, indicate that the effect of vaccines on the spread and mutation of SARS-CoV-2 is reliant on relative robustness of immunity conferred by a single dose.

To date, 11 vaccines have been approved by at least one country. The Pfizer-BioNTech vaccine has been approved in 60 countries, while the Moderna vaccine is approved in 38 countries. Based on a different vaccine platform, the Oxford-AstraZeneca vaccine is authorized by the World Health Organization and the European Medicines Agency.

The Pfizer-BioNTech and Moderna vaccines elicit adaptive immunity against SARS-CoV-2 in response to the introduction of messenger ribonucleic acid (mRNA) molecules that encode the spike protein of SARS-CoV-2. Both two-dose regimens appear to provide greater than 95% protection (Pfizer-BioNTech) and 94% protection (Moderna) against symptomatic COVID-19. Alternatively, the Oxford-AstraZeneca vaccine uses a nonreplicating adenovirus vector and through clinical trials has demonstrated a range of 62%-90% efficacy when administered in a two-dose regimen.

As countries grapple with international delivery and distribution lags of COVID-19 vaccines, some countries, such as the U.S. and Canada, have chosen to delay the second dose of some two-dose authorized vaccines in an effort to increase the number of individuals receiving at least one dose.

To date, the evidence of efficacy of the Pfizer-BioNTech, Moderna, and Oxford-AstraZeneca vaccines given as a single dose is limited and the consequences of deviating from manufacturer-prescribed dosing regimens at the population scale remain unknown.

Generally, the strength and duration of both natural immunity and vaccine-induced immunity against SARS-CoV-2 remains uncertain. Likely, both factors will play a role in shaping future COVID-19, with particular concern of antigenic drift via immune escape. It is difficult to quantify the average duration of immunity because it requires measuring reinfection rates after waning of immunity due to natural infection or vaccination.

Epidemiological effects of one dose versus two doses

They found that a one-dose strategy that elicits a weak immune response produces some short-term benefits, including a reduction in infection after vaccination. However, this strategy will also permit the accumulation of partially susceptible individuals with waned one-dose vaccinal immunity, opening the door for more potential viral evolution and a higher infection burden in the long-term.

A single-dose regimen that produces a stronger immune response can have the benefit of decreasing the infection burden in future peaks and allow for the delay in time for receiving a second dose. The researchers found that when the immune response conferred by a single dose is close to the robustness following two doses, the total case numbers can be substantially reduced by delaying the second dose. Importantly, the team noted that as the interdose period grows and waning after one-dose vaccination occurs, the population of partially susceptible individuals increases, and the single dose will only achieve marginal effectiveness.

Moreover, the authors noted that vaccination rates significantly effect the effectiveness of single-dose strategies. Low vaccination rates can lead to an insufficient proportion of the population being immunized. They added that the vaccine administration rate and vaccine refusal may play an important role in achieving community immunity.

Evolutionary consequences of one dose versus two doses

In terms of evolutionary consequences of one-dose COVID-19 strategies, the researchers found that while a strongly immunologic single dose strategy can reduce infection rates, it may also lead to increased viral adaptation rates in partially susceptible individuals.

It is expected that the greatest opportunity for variants to arise is in hosts with the highest viral load (and least immunity), while the greatest selection for mutational escape likely occurs in individuals with the strongest immune responses. Previous research based on seasonal influenza suggests that partially immune individuals (permitting intermediate levels of selection and transmission) could maximize levels of escape.

Therefore, the authors suggested that secondarily infected individuals (after waning of natural immunity or immunity conferred from one or two doses of a vaccine) would be key potential contributors to viral immune escape.

In the researchers' model, when one dose vaccinal immunity is low, there was rapid accumulation of partially susceptible individuals and a greater infection burden, echoing their findings from the epidemiological simulations. They suggested that this effect can be mitigated by implementing a two-dose strategy, even with a longer inter-dose period than recommended.

"Thus, to avoid these potentially pessimistic evolutionary outcomes," the authors explained. "Our results highlight the importance of rapid vaccine deployment." 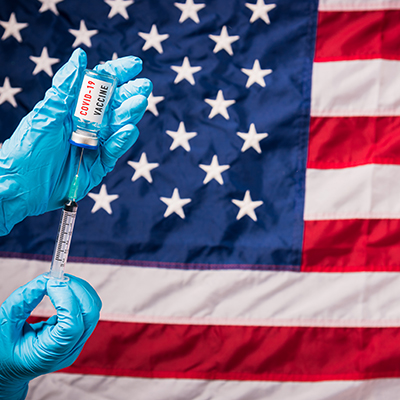