March 27, 2019 -- “What’s the first thing you think of when you hear Ebola?” asked speaker John Dye, PhD, of the U.S. Army Medical Research Institute of Infectious Diseases at the American Society for Microbiology’s (ASM) Biothreats conference, held during the last week of January in Arlington, Virginia. Ebola was one of the most talked about high-consequence pathogens at the event. However, the discussions were not somber but rather inspirational, focused on learning from past outbreaks in order to inform novel ways to approach detection and prevention of Ebola, as well as other pathogens and toxins. 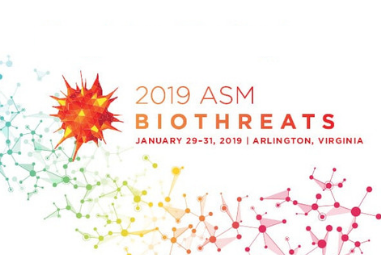 Speakers at the conference covered everything from the largest Ebola epidemics, to the policies in place to enforce biosecurity, to the newest technologies to detect minute amounts of ricin and abrin toxins, and much more. Keynote speaker Anne Schuchat, MD, principal deputy director of the Centers for Disease Control and Prevention (CDC), touched on what was learned from the four largest epidemics of Ebola (the 1976 and 1995 epidemics in Zaire, the 2014 pandemic in Guinea, Sierra Leone and Liberia, and 2018 outbreak in the Democratic Republic of Congo). She explained that most of these cases of Ebola were nosocomial (originating in the hospital), and that health care workers were most impacted, due to use and reuse of needles for vaccines, lack of gloves, scarcity of detection or prevention methods and improper burial practices. Her speech was followed by many sessions that touched on how high-consequence pathogens can have an even greater negative impact when coupled with lack of diagnostic tests, which directly impacts the ability to contain the outbreak.

While ASM Biothreats covered new technologies and important case studies of outbreaks, panelists also reflected on policies that provide guidelines for biosecurity, biosurveillance and use of pathogens. Panelist Christopher Oehman, PhD touched on the complexities of cybersecurity and how it should be viewed as similar to the immune system. For example, when we are exposed to a pathogen, our bodies react immediately, not only to eliminate the threat, but also to ensure that our bodies are still able to function—in other words, to be resilient. Similarly, if our cybersecurity has been compromised, our priority should be to ensure that our systems can withstand and be resilient against the attack. Panelist Gregory Koblentz, PhD, deputy director of the Biodefense Graduate Program at George Mason University, spoke on the misuse or reckless use of vectors, and how to prepare for both predictable outcomes as well as unidentified consequences. He highlighted his project, “Editing Biosecurity: Needs and Strategies for Governing Genome Editing.”

“Clade X: A Pandemic Scenario” was a session led by Gigi Gronvall, PhD, Associate Professor at Johns Hopkins Bloomberg School of Public Health, and Julie Gerberding of the CDC’s Agency for Toxic Substances and Disease Registry. They recounted a tabletop exercise that simulated a series of meetings to advise the President on difficult policy issues arising from the scenario. The scenario described Clade X as a serious respiratory disease that originates in Germany and Venezuela. A novel strain of human parainfluenza virus with genetic elements of Nipah virus, Clade X has no vaccine. Within a year, 150 million people have died from the disease, with 15 million in the US alone.

The panelists touched on the policies needed to prevent or reduce the consequences in the event of such an outbreak. This table talk highlighted some of the most important points of the entire conference, including the need for faster development of vaccines and drugs for novel pathogens, a stronger global health security system and a strategy to combat the spread of infectious diseases.

What makes these detection and diagnostic devices so important? First responders to any outbreak should be able to quickly and correctly assess the pathogen or toxin exposure in order to take the appropriate next steps. Some of these new devices enable a positive or negative reading directly in the field. The ability to give this objective reading means that first responders do not need to be trained to read results of in-field diagnostic tests to allow the best point-of-care treatment. Listed below are several portable/in-field biothreat detection technologies that were highlighted at the conference.

Tetracore held a session to provide an overview of the capabilities of its BioThreat Alert Multiplex Strips for testing for biological toxins and bacteria, which are used in conjunction with the handheld BioThreat Alert TX Flex Reader. The strips, based on a lateral flow assay, can screen for the presence of up to 5 targets in 1 environmental sample per test. With only about 0.12 mL of sample required per test, the strips can produce results in 20 minutes.

Biofire Defense’s RAZOR EX Biodetection system is an in-field PCR unit with a less than 1% error rate that can provide results in less than 30 min to identify 10 Category A and B bioterrorism agents. It has very high specificity and has been implemented by the military, hazmat teams and first responders. It comes with pouches of pre-loaded PCR reagents, making it easy to use and load in the field.

Beyond biodetection devices, companies such as InnovaPrep showcased its fully automated Concentrating Pipette Select system, calling it highly effective for bacteria, parasites, molds, fungal spores, whole cells and viruses as it replaces the need for centrifugation and enrichment. The pipette tips are designed to remove micro-organisms from the sample matrix. Users can customize up to 15 protocols and use very small sample sizes (200 mL), and are able to process larger volumes than other methods (up to 3 L).

The ASM Biothreats conference took a holistic approach to its sessions and exhibitors. The next meeting will be held in Washington, DC, in 2020.