July 5, 2018 -- If you’ve been following The Science Advisory Board’s series on chromatography, you will likely see similarities between today’s feature, Ion Chromatography, and another tech we’ve uncovered, HPLC. In terms of hardware used, the two share many commonalities. However, there are many differences in application and experimentation. Ion chromatography allows for the separation of anions and cations in an ionic solution. The mobile phase consists of an ionic solution, which runs through the stationary phase, a column packed with ion exchange resin. When performing cation analysis; resins will have a negative charge, while when performing anion analysis; resins will have a positive charge. The greater the affinity of the ion for stationary phase, the longer it will be fixed to the column. 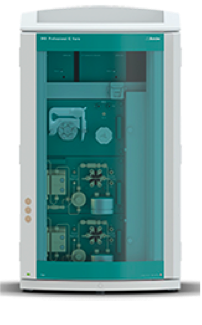 In Ion chromatography, a variety of detectors are available, including UV/Vis, MS, and amperometry, but the most common detector type is conductivity due to its high sensitivity, selectivity and relatively low cost of operation. In addition to this notable difference (conductivity detection is relatively uncommon in HPLC), ion chromatography systems must also deal with changes in ionic strength during experiments. A common concern in ion chromatography experiments is the addition of carbon dioxide to the eluent, which would form carbonate, thus changing the eluting ion. This is handled by the use of reagent free technologies and ion suppression systems to reduce exposure of eluent systems to air and other potential ionic contaminants, as well as to make IC simpler.

For reagent free systems, users only need to add deionized water, and the system electrolytically generates the eluents and regenerants required for IC applications. The eluent generation technology results in a large closed loop system, reducing the need for external introduction of solutions into the system, which in turn reduces carbonate contamination. This can be one of the largest sources of instability and noise in IC. Further, the use of polymer and plastic pumps reduces the presence of ions from corrosion of metal components within the system. 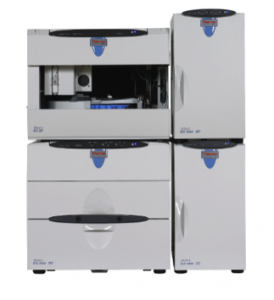 Ion chromatography differs from ‘standard’ HPLC using ion-exchange columns when ionic strength suppression methods are used. This occurs because the process involves eluting the ions to be analyzed from the ion-exchange resin with an eluent, which then converts them into dissolved salts, resulting in the materials emerging from the column being extremely conductive.

To detect ions as they emerge from the column, particularly ionic species that are present at low levels, a conductivity detector with a wide dynamic range and high sensitivity to small changes in signal in a high ionic strength background must be used. However, it is typically simpler to convert the salts back to a slightly ionized form, so that any given ion will produce a more significant change in conductivity. This can be accomplished through a suppressor process, in which the eluent is passed through a second ion-exchange column.

What types of chromatography do you use in your lab? Start the discussion below!