Survey: Scientists want to boost use of lab automation


In the era of big data and new analytical technologies, research laboratories are rapidly adopting new lab automation equipment and processes. While most labs are already using some type of automation in their workflows, many researchers would like to increase their use of these new technologies, according to results from a new ScienceBoard.net survey.

In total, 74% of scientists reported that less than half of their lab operations are automated. Of those surveyed, 19% of respondents said that their labs are between 51% and 75% automated and only 6% reported an automation percentage over 76%.

Respondents to the survey were members of ScienceBoard.net, with data collection completed on April 20.

Of the 960 participants in the study, 66% were scientists, researchers, or investigators; 26% were pharmaceutical or biotech scientists; 15% were laboratory staff; and 9% were postdoctoral researchers. Most participants were associated with a university (41%) or a pharmaceutical (20%) or life science (15%) company. On a regional basis, 33% of participants were based in North America, 24% in Europe, and 36% in Asia, while the remaining 7% were from various other locations around the world.

Laboratory automation can be divided into two main categories: (1) hardware and equipment used to manually gather data and (2) software and informatics tools to manage data.

The different types of lab automation tools include the following:

How do researchers use lab automation?

In the ScienceBoard.net survey, most researchers reported that they currently use liquid handling systems, microplate readers, and to a lesser degree (around 49%) multiplex and high-throughput systems. Far fewer scientists reported using advanced robots, but around 45% did note that they would like to use robotics in the future. Nearly 60% of researchers also said they would like to use multiplex and high-throughput systems in the future. 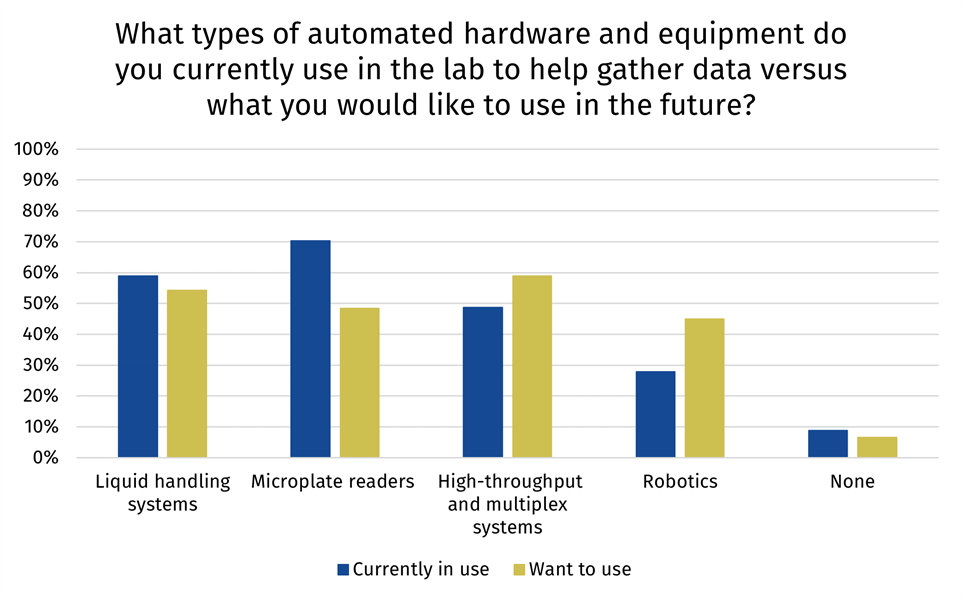 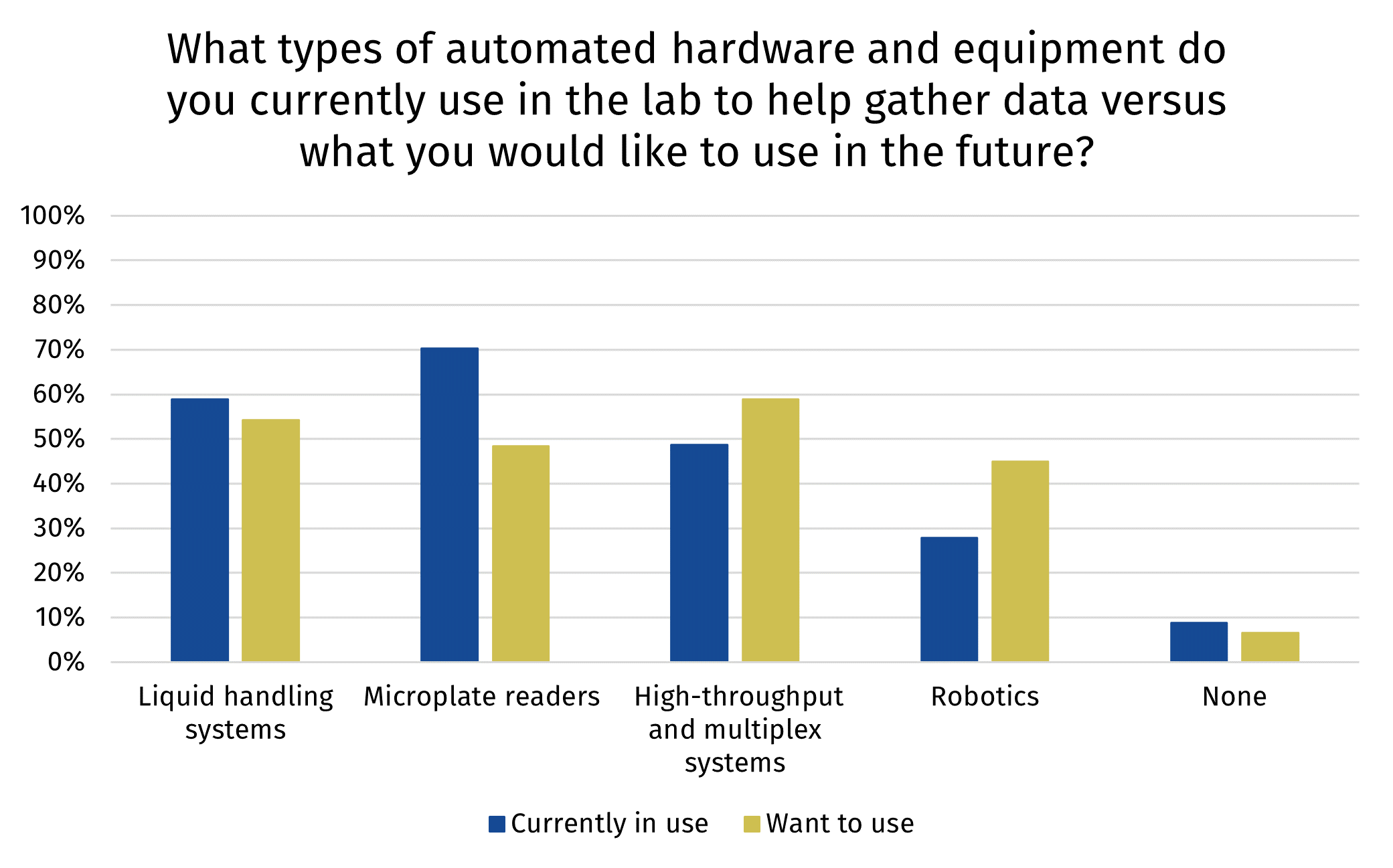 The most commonly used software and tools reported in the current survey were bioinformatics/cheminformatics, LIMSs, and specialized SDMSs. Researchers wanted to increase the use of electronic laboratory notebooks, SDMSs, and laboratory workflow automation systems in the future.

When asked to select the top three benefits of lab automation and informatics, respondents reported the following:

Other benefits that ranked highly were fast traceability of data and ease of generation and dissemination of reports.

If the benefits of lab automation are so widely recognized, then why aren't more researchers using tools that are already available? Not surprisingly, cost is the largest factor restricting the use of lab automation, with 65% of respondents citing lack of funds as a main restriction. Over a quarter of the scientists in the poll either do not have purchasing authority or do not plan to make any capital investments in lab automation in the next year.

Another 33% plan to spend less than $50,000 in the coming year, and 27% plan to spend between $50,000 and $200,000. So, while it is clear that lab automation is a priority in many organizations, cost is still a limiting factor for practical implementation in many laboratories.

Another limitation to the implementation of lab automation is the COVID-19 pandemic: 56% of scientists reported that the pandemic delayed their plans to make capital investments in lab automation. This group likely included teams focused on non-COVID-19 research. Alternatively, a small percentage of researchers (12%) said that the pandemic accelerated their investments -- a trend observed at many companies trying to contribute to pandemic-related solutions. 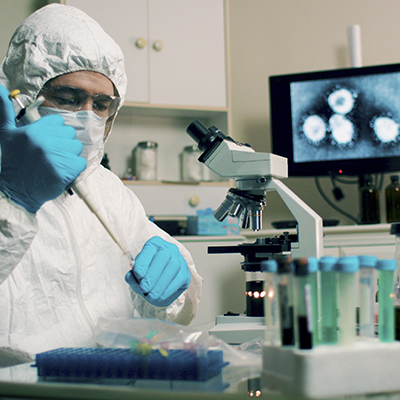 COVID-19 shuts down research labs as concern grows among scientists
Almost half of all scientific research labs that participated in a recent survey were shut down due to concerns about the COVID-19 outbreak. Survey results...
The Human Side of Science: Scientific Personality Assessment in Action
Over 900 scientists participated in our Scientific personality assessment where they determined if they are a(n): Organizer (39%), Leader (28%), Enthusiast...
Copyright © 2021 scienceboard.net