May 3, 2021 -- The first comprehensive single-cell atlas of the human tooth reveals how different dental tissues control the activity of stem cells. Published recently in iScience, the study used advanced single-cell sequencing technology to show that changes in the cellular environment may explain differences in the behavior of stem cells.

Stem cells are an intense area of focus for scientists interested in their ability to regenerate lost or damaged tissue. These cells are found in many parts of the human body, including our teeth, and are able to regenerate and transform into other types of cells.

The behavior of stem cells is regulated by changes in their surrounding environment, including molecular cues from other cells and physical stresses. By understanding the factors that control tissue regeneration by stem cells, scientists hope to create new treatments. 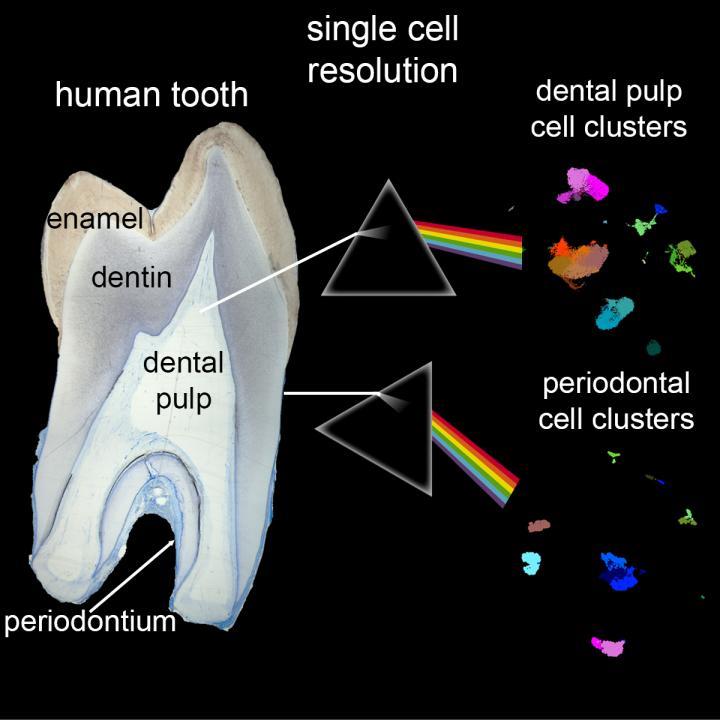 Composition of a tooth. Image courtesy of the Center of Dental Medicine/University of Zurich (ZZM/UZH).

Stem cells can be found in an inner region of the tooth, known as dental pulp, and the periodontium, which anchors the tooth to the bone. In a new study, researchers at the University of Zurich and ETH Zurich used single-cell RNA sequencing (scRNAseq) to examine the cells present in these two dental tissues. By comparing patterns in the gene activity, the researchers could identify different cell types that exist in each tissue.

Using this approach, the researchers discovered that they could cluster the stem cell populations into groups based on their gene activity. They determined that both dental pulp and periodontium stem cells express the same markers, including myosin heavy chain 11 (MYH11), Thy-1 cell surface antigen (THY1/CD90), and C-C motif chemokine ligand 2 (CCL2).

However, the differences between the cells in the two tissues were much more minor than expected and the researchers found that the cells were strikingly similar overall. This suggests that the variation in the behavior of the stem cells is due to the conditions within the tissues rather than intrinsic genetic differences.

"We think their different behavior is possibly brought about by their distinctive microenvironment," said Pierfrancesco Pagella, PhD, from the Institute of Oral Biology at the University of Zurich, in a statement.

This finding could have a significant effect on research efforts to enhance the regenerative capabilities of stem cells. However, the theory will need to be validated in further experiments.

The study showed that the dental pulp is mostly composed of fibroblasts, cells that are very common in connective tissue.

By comparison, the periodontium had much more epithelial cells, which line the surfaces in the body. These cells also did not behave the same way in the two tissues, producing different sets of molecules that may control how the stem cells behave.

"Our study provides an unprecedented understanding of the composition of these two tissues, which are subject to tooth-specific and bacterially-linked pathologies such as caries and periodontitis," Pagella said.

Among the differences was an increase in gene activity linked to collagen production and turnover in the periodontal fibroblast cells. The authors of the paper wrote that these cellular and molecular signatures reflect the tissue's "continuous and dynamic remodeling" in its role in absorbing the shocks associated with chewing.

Previous studies using scRNAseq have examined mouse teeth and made comparisons to human dental pulp. This latest research is the first to compare the cell populations of the dental pulp and periodontium in the human tooth.

The cells studied by the team came from five wisdom teeth extracted by dentists in Zurich. The authors acknowledged in the paper that isolating the cells from the teeth may have introduced variability between samples and that some cells may not have survived the process.

While this study examined healthy teeth, the technology for studying single cells could provide new insights into diseases in the future.

"Single-cell approaches can help us understand the interactions of dental pulp and periodontal cells involved in immune responses upon bacterial insults," said senior author Thimios Mitsiadis, PhD, a professor at the University of Zurich. "Therefore, single-cell analysis could be useful for diagnostic purposes to support the early detection of dental diseases. These innovations are the consequence of the fusion between bioinformatics and modern dentistry."